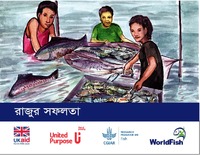 This story describes Raju’s adoption of best farming practices. He was following conventional farming methods but did not have enough capital to intensify his production and was disappointed with his annual profit. Ali, a local service provider trained by WorldFish, told him how to fatten overwintered carp and prawn at low density and low input and get faster growth. By following Ali’s advice, he found that he did not need to spend a lot of money on feed because he was stocking less fish. He was also able to pay for the feed with his own money until they became a marketable size. Because of the faster growth, he could harvest earlier and make a good profit. He shared this knowledge with his neighbors. The technology became popular and local demand for overwintered carp fry and prawn juveniles also increased.