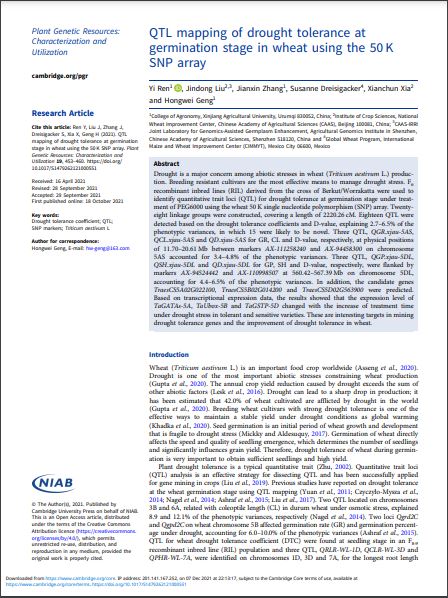 Drought is a major concern among abiotic stresses in wheat (Triticum aestivum L.) production. Breeding resistant cultivars are the most effective means to manage drought stress. F6 recombinant inbred lines (RIL) derived from the cross of Berkut/Worrakatta were used to identify quantitative trait loci (QTL) for drought tolerance at germination stage under treatment of PEG6000 using the wheat 50 K single nucleotide polymorphism (SNP) array. Twenty-eight linkage groups were constructed, covering a length of 2220.26 cM. Eighteen QTL were detected based on the drought tolerance coefficients and D-value, explaining 2.7–6.5% of the phenotypic variances, in which 15 were likely to be novel. Three QTL, QGR.xjau-5AS, QCL.xjau-5AS and QD.xjau-5AS for GR, CL and D-value, respectively, at physical positions of 11.70–20.61 Mb between markers AX-111258240 and AX-94458300 on chromosome 5AS accounted for 3.4–4.8% of the phenotypic variances. Three QTL, QGP.xjau-5DL, QSH.xjau-5DL and QD.xjau-5DL for GP, SH and D-value, respectively, were flanked by markers AX-94524442 and AX-110998507 at 560.42–567.39 Mb on chromosome 5DL, accounting for 4.4–6.5% of the phenotypic variances. In addition, the candidate genes TraesCS5A02G022100, TraesCS5B02G014200 and TraesCS5D02G563900 were predicted. Based on transcriptional expression data, the results showed that the expression level of TaGATAs-5A, TaUbox-5B and TaGSTP-5D changed with the increase of treatment time under drought stress in tolerant and sensitive varieties. These are interesting targets in mining drought tolerance genes and the improvement of drought tolerance in wheat.