Public policies for the development of a sustainable cattle sector in Colombia, Argentina, and Costa Rica: A comparative analysis (2010–2020) 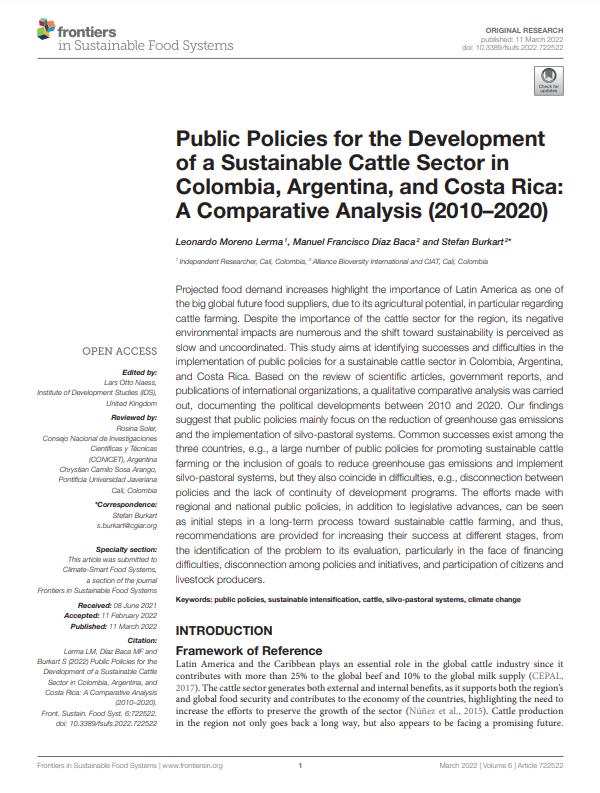 Projected food demand increases highlight the importance of Latin America as one of the big global future food suppliers, due to its agricultural potential, in particular regarding cattle farming. Despite the importance of the cattle sector for the region, its negative environmental impacts are numerous and the shift toward sustainability is perceived as slow and uncoordinated. This study aims at identifying successes and difficulties in the implementation of public policies for a sustainable cattle sector in Colombia, Argentina, and Costa Rica. Based on the review of scientific articles, government reports, and publications of international organizations, a qualitative comparative analysis was carried out, documenting the political developments between 2010 and 2020.

Our findings suggest that public policies mainly focus on the reduction of greenhouse gas emissions and the implementation of silvo-pastoral systems. Common successes exist among the three countries, e.g., a large number of public policies for promoting sustainable cattle farming or the inclusion of goals to reduce greenhouse gas emissions and implement silvo-pastoral systems, but they also coincide in difficulties, e.g., disconnection between policies and the lack of continuity of development programs. The efforts made with regional and national public policies, in addition to legislative advances, can be seen as initial steps in a long-term process toward sustainable cattle farming, and thus, recommendations are provided for increasing their success at different stages, from the identification of the problem to its evaluation, particularly in the face of financing difficulties, disconnection among policies and initiatives, and participation of citizens and livestock producers.