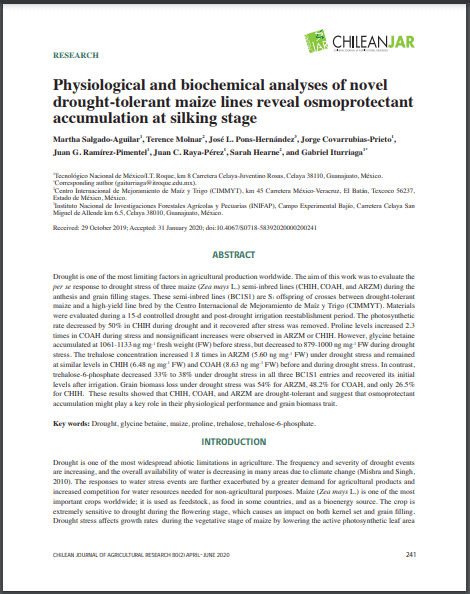 Drought is one of the most limiting factors in agricultural production worldwide. The aim of this work was to evaluate the per se response to drought stress of three maize (Zea mays L.) semi-inbred lines (CHIH, COAH, and ARZM) during the anthesis and grain filling stages. These semi-inbred lines (BC1S1) are S1 offspring of crosses between drought-tolerant maize and a high-yield line bred by the Centro Internacional de Mejoramiento de Maíz y Trigo (CIMMYT). Materials were evaluated during a 15-d controlled drought and post-drought irrigation reestablishment period. The photosynthetic rate decreased by 50% in CHIH during drought and it recovered after stress was removed. Proline levels increased 2.3 times in COAH during stress and nonsignificant increases were observed in ARZM or CHIH. However, glycine betaine accumulated at 1061-1133 ng mg-1 fresh weight (FW) before stress, but decreased to 879-1000 ng mg-1 FW during drought stress. The trehalose concentration increased 1.8 times in ARZM (5.60 ng mg-1 FW) under drought stress and remained at similar levels in CHIH (6.48 ng mg-1 FW) and COAH (8.63 ng mg-1 FW) before and during drought stress. In contrast, trehalose-6-phosphate decreased 33% to 38% under drought stress in all three BC1S1 entries and recovered its initial levels after irrigation. Grain biomass loss under drought stress was 54% for ARZM, 48.2% for COAH, and only 26.5% for CHIH. These results showed that CHIH, COAH, and ARZM are drought-tolerant and suggest that osmoprotectant accumulation might play a key role in their physiological performance and grain biomass trait.