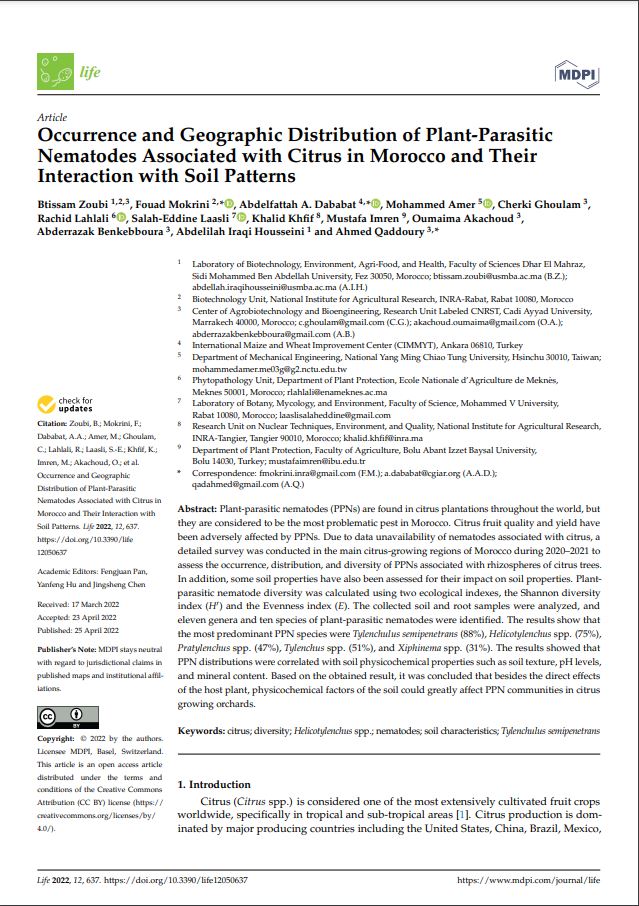 Plant-parasitic nematodes (PPNs) are found in citrus plantations throughout the world, but they are considered to be the most problematic pest in Morocco. Citrus fruit quality and yield have been adversely affected by PPNs. Due to data unavailability of nematodes associated with citrus, a detailed survey was conducted in the main citrus-growing regions of Morocco during 2020–2021 to assess the occurrence, distribution, and diversity of PPNs associated with rhizospheres of citrus trees. In addition, some soil properties have also been assessed for their impact on soil properties. Plant-parasitic nematode diversity was calculated using two ecological indexes, the Shannon diversity index (H′) and the Evenness index (E). The collected soil and root samples were analyzed, and eleven genera and ten species of plant-parasitic nematodes were identified. The results show that the most predominant PPN species were Tylenchulus semipenetrans (88%), Helicotylenchus spp. (75%), Pratylenchus spp. (47%), Tylenchus spp. (51%), and Xiphinema spp. (31%). The results showed that PPN distributions were correlated with soil physicochemical properties such as soil texture, pH levels, and mineral content. Based on the obtained result, it was concluded that besides the direct effects of the host plant, physicochemical factors of the soil could greatly affect PPN communities in citrus growing orchards.