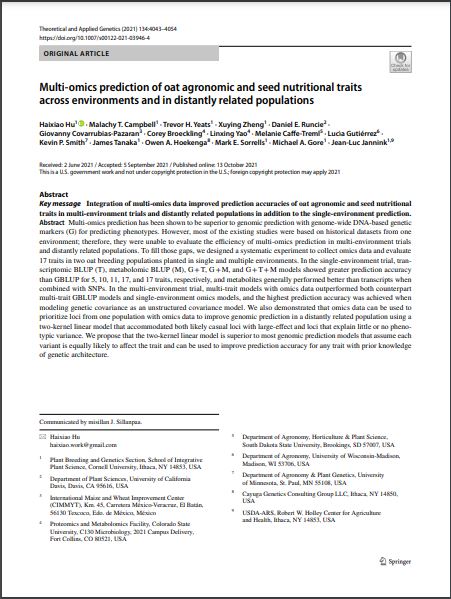 Multi-omics prediction has been shown to be superior to genomic prediction with genome-wide DNA-based genetic markers (G) for predicting phenotypes. However, most of the existing studies were based on historical datasets from one environment; therefore, they were unable to evaluate the efficiency of multi-omics prediction in multi-environment trials and distantly related populations. To fill those gaps, we designed a systematic experiment to collect omics data and evaluate 17 traits in two oat breeding populations planted in single and multiple environments. In the single-environment trial, transcriptomic BLUP (T), metabolomic BLUP (M), G + T, G + M, and G + T + M models showed greater prediction accuracy than GBLUP for 5, 10, 11, 17, and 17 traits, respectively, and metabolites generally performed better than transcripts when combined with SNPs. In the multi-environment trial, multi-trait models with omics data outperformed both counterpart multi-trait GBLUP models and single-environment omics models, and the highest prediction accuracy was achieved when modeling genetic covariance as an unstructured covariance model. We also demonstrated that omics data can be used to prioritize loci from one population with omics data to improve genomic prediction in a distantly related population using a two-kernel linear model that accommodated both likely casual loci with large-effect and loci that explain little or no phenotypic variance. We propose that the two-kernel linear model is superior to most genomic prediction models that assume each variant is equally likely to affect the trait and can be used to improve prediction accuracy for any trait with prior knowledge of genetic architecture.