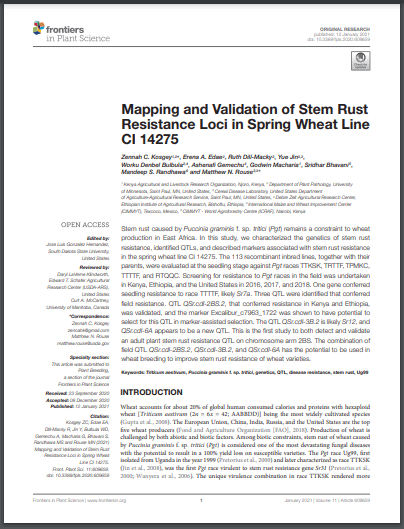 Stem rust caused by Puccinia graminis f. sp. tritici (Pgt) remains a constraint to wheat production in East Africa. In this study, we characterized the genetics of stem rust resistance, identified QTLs, and described markers associated with stem rust resistance in the spring wheat line CI 14275. The 113 recombinant inbred lines, together with their parents, were evaluated at the seedling stage against Pgt races TTKSK, TRTTF, TPMKC, TTTTF, and RTQQC. Screening for resistance to Pgt races in the field was undertaken in Kenya, Ethiopia, and the United States in 2016, 2017, and 2018. One gene conferred seedling resistance to race TTTTF, likely Sr7a. Three QTL were identified that conferred field resistance. QTL QSr.cdl-2BS.2, that conferred resistance in Kenya and Ethiopia, was validated, and the marker Excalibur_c7963_1722 was shown to have potential to select for this QTL in marker-assisted selection. The QTL QSr.cdl-3B.2 is likely Sr12, and QSr.cdl-6A appears to be a new QTL. This is the first study to both detect and validate an adult plant stem rust resistance QTL on chromosome arm 2BS. The combination of field QTL QSr.cdl-2BS.2, QSr.cdl-3B.2, and QSr.cdl-6A has the potential to be used in wheat breeding to improve stem rust resistance of wheat varieties.