Maize intercropping in the milpa system. Diversity, extent and importance for nutritional security in the Western Highlands of Guatemala 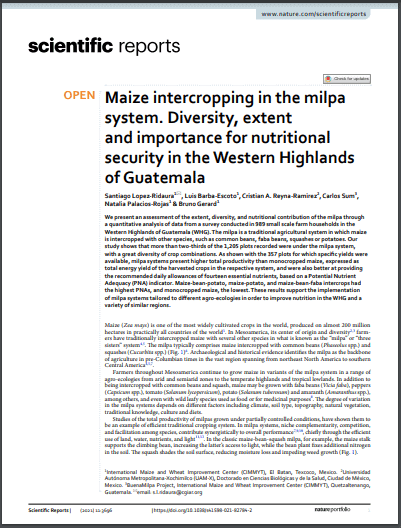 We present an assessment of the extent, diversity, and nutritional contribution of the milpa through a quantitative analysis of data from a survey conducted in 989 small scale farm households in the Western Highlands of Guatemala (WHG). The milpa is a traditional agricultural system in which maize is intercropped with other species, such as common beans, faba beans, squashes or potatoes. Our study shows that more than two-thirds of the 1,205 plots recorded were under the milpa system, with a great diversity of crop combinations. As shown with the 357 plots for which specific yields were available, milpa systems present higher total productivity than monocropped maize, expressed as total energy yield of the harvested crops in the respective system, and were also better at providing the recommended daily allowances of fourteen essential nutrients, based on a Potential Nutrient Adequacy (PNA) indicator. Maize-bean-potato, maize-potato, and maize-bean-faba intercrops had the highest PNAs, and monocropped maize, the lowest. These results support the implementation of milpa systems tailored to different agro-ecologies in order to improve nutrition in the WHG and a variety of similar regions.