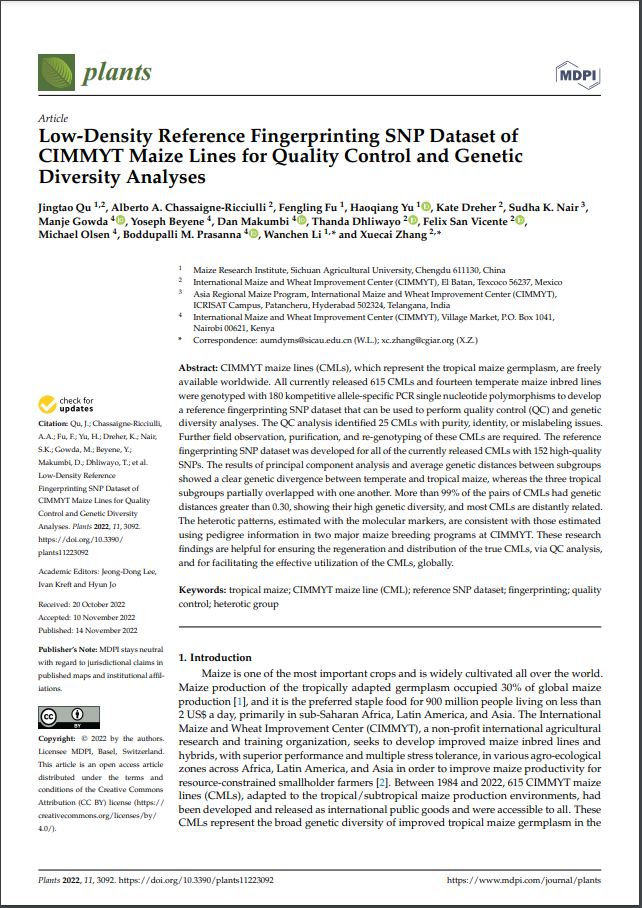 CIMMYT maize lines (CMLs), which represent the tropical maize germplasm, are freely available worldwide. All currently released 615 CMLs and fourteen temperate maize inbred lines were genotyped with 180 kompetitive allele-specific PCR single nucleotide polymorphisms to develop a reference fingerprinting SNP dataset that can be used to perform quality control (QC) and genetic diversity analyses. The QC analysis identified 25 CMLs with purity, identity, or mislabeling issues. Further field observation, purification, and re-genotyping of these CMLs are required. The reference fingerprinting SNP dataset was developed for all of the currently released CMLs with 152 high-quality SNPs. The results of principal component analysis and average genetic distances between subgroups showed a clear genetic divergence between temperate and tropical maize, whereas the three tropical subgroups partially overlapped with one another. More than 99% of the pairs of CMLs had genetic distances greater than 0.30, showing their high genetic diversity, and most CMLs are distantly related. The heterotic patterns, estimated with the molecular markers, are consistent with those estimated using pedigree information in two major maize breeding programs at CIMMYT. These research findings are helpful for ensuring the regeneration and distribution of the true CMLs, via QC analysis, and for facilitating the effective utilization of the CMLs, globally.