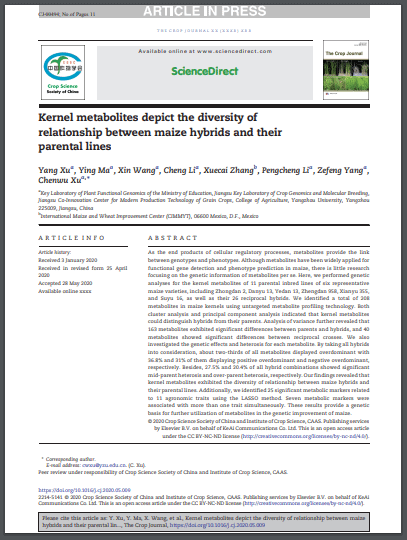 Kernel metabolites depict the diversity of relationship between maize hybrids and their parental lines
As the end products of cellular regulatory processes, metabolites provide the link between genotypes and phenotypes. Although metabolites have been widely applied for functional gene detection and phenotype prediction in maize, there is little research focusing on the genetic information of metabolites per se. Here, we performed genetic analyses for the kernel metabolites of 11 parental inbred lines of six representative maize varieties, including Zhongdan 2, Danyu 13, Yedan 13, Zhengdan 958, Xianyu 355, and Suyu 16, as well as their 26 reciprocal hybrids. We identified a total of 208 metabolites in maize kernels using untargeted metabolite profiling technology. Both cluster analysis and principal component analysis indicated that kernel metabolites could distinguish hybrids from their parents. Analysis of variance further revealed that 163 metabolites exhibited significant differences between parents and hybrids, and 40 metabolites showed significant differences between reciprocal crosses. We also investigated the genetic effects and heterosis for each metabolite. By taking all hybrids into consideration, about two-thirds of all metabolites displayed overdominant with 36.8% and 31% of them displaying positive overdominant and negative overdominant, respectively. Besides, 27.5% and 20.4% of all hybrid combinations showed significant mid-parent heterosis and over-parent heterosis, respectively. Our findings revealed that kernel metabolites exhibited the diversity of relationship between maize hybrids and their parental lines. Additionally, we identified 25 significant metabolic markers related to 11 agronomic traits using the LASSO method. Seven metabolic markers were associated with more than one trait simultaneously. These results provide a genetic basis for further utilization of metabolites in the genetic improvement of maize.