How to Make a Smartphone-Based App for Agricultural Advice Attractive: Insights from a Choice Experiment in Mexico 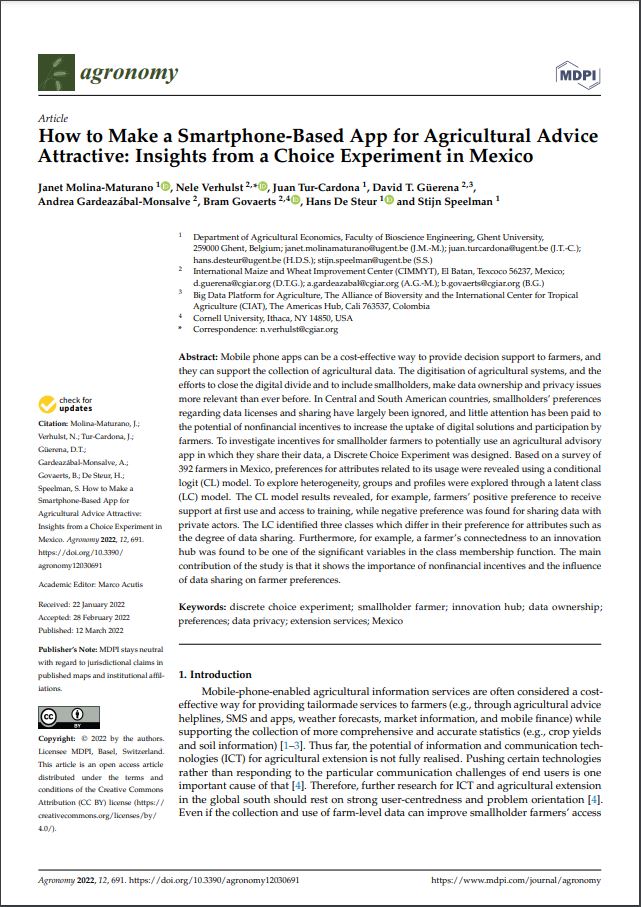 Mobile phone apps can be a cost-effective way to provide decision support to farmers, and they can support the collection of agricultural data. The digitisation of agricultural systems, and the efforts to close the digital divide and to include smallholders, make data ownership and privacy issues more relevant than ever before. In Central and South American countries, smallholders’ preferences regarding data licenses and sharing have largely been ignored, and little attention has been paid to the potential of nonfinancial incentives to increase the uptake of digital solutions and participation by farmers. To investigate incentives for smallholder farmers to potentially use an agricultural advisory app in which they share their data, a Discrete Choice Experiment was designed. Based on a survey of 392 farmers in Mexico, preferences for attributes related to its usage were revealed using a conditional logit (CL) model. To explore heterogeneity, groups and profiles were explored through a latent class (LC) model. The CL model results revealed, for example, farmers’ positive preference to receive support at first use and access to training, while negative preference was found for sharing data with private actors. The LC identified three classes which differ in their preference for attributes such as the degree of data sharing. Furthermore, for example, a farmer’s connectedness to an innovation hub was found to be one of the significant variables in the class membership function. The main contribution of the study is that it shows the importance of nonfinancial incentives and the influence of data sharing on farmer preferences.