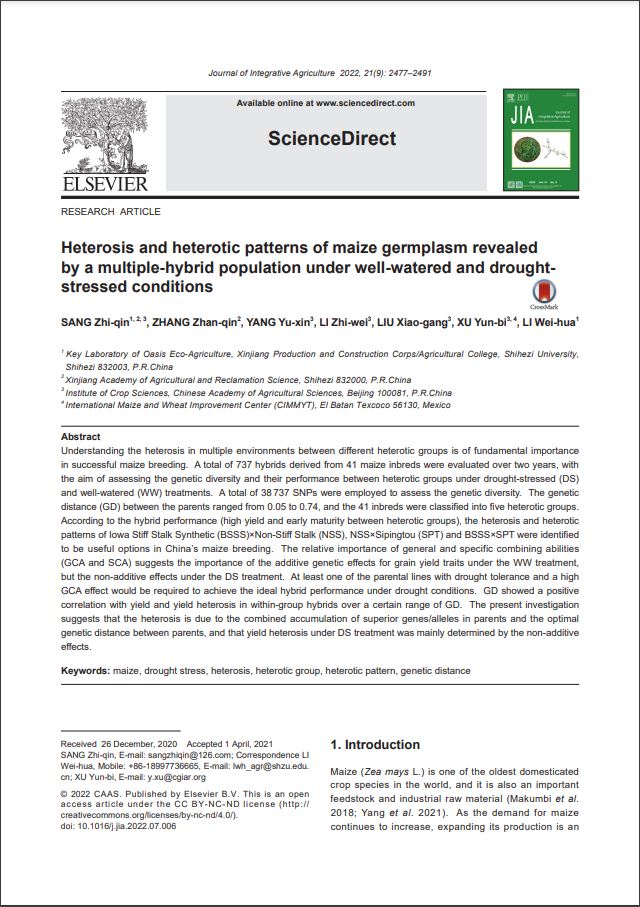 Understanding the heterosis in multiple environments between different heterotic groups is of fundamental importance in successful maize breeding. A total of 737 hybrids derived from 41 maize inbreds were evaluated over two years, with the aim of assessing the genetic diversity and their performance between heterotic groups under drought-stressed (DS) and well-watered (WW) treatments. A total of 38 737 SNPs were employed to assess the genetic diversity. The genetic distance (GD) between the parents ranged from 0.05 to 0.74, and the 41 inbreds were classified into five heterotic groups. According to the hybrid performance (high yield and early maturity between heterotic groups), the heterosis and heterotic patterns of Iowa Stiff Stalk Synthetic (BSSS)×Non-Stiff Stalk (NSS), NSS×Sipingtou (SPT) and BSSS×SPT were identified to be useful options in China’s maize breeding. The relative importance of general and specific combining abilities (GCA and SCA) suggests the importance of the additive genetic effects for grain yield traits under the WW treatment, but the non-additive effects under the DS treatment. At least one of the parental lines with drought tolerance and a high GCA effect would be required to achieve the ideal hybrid performance under drought conditions. GD showed a positive correlation with yield and yield heterosis in within-group hybrids over a certain range of GD. The present investigation suggests that the heterosis is due to the combined accumulation of superior genes/alleles in parents and the optimal genetic distance between parents, and that yield heterosis under DS treatment was mainly determined by the non-additive effects.