Global Changes in Cultivated Area and Breeding Activities of Durum Wheat from 1800 to Date: A Historical Review 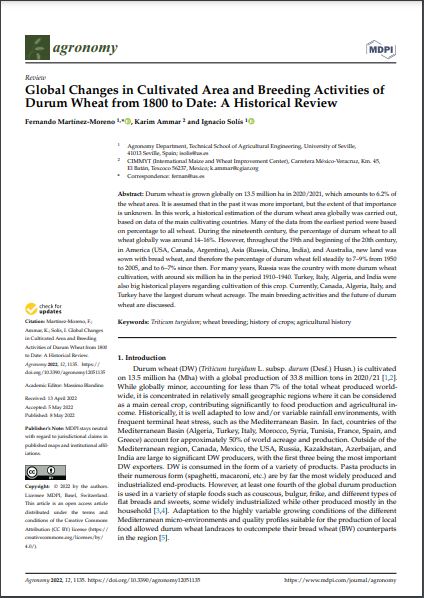 Durum wheat is grown globally on 13.5 million ha in 2020/2021, which amounts to 6.2% of the wheat area. It is assumed that in the past it was more important, but the extent of that importance is unknown. In this work, a historical estimation of the durum wheat area globally was carried out, based on data of the main cultivating countries. Many of the data from the earliest period were based on percentage to all wheat. During the nineteenth century, the percentage of durum wheat to all wheat globally was around 14–16%. However, throughout the 19th and beginning of the 20th century, in America (USA, Canada, Argentina), Asia (Russia, China, India), and Australia, new land was sown with bread wheat, and therefore the percentage of durum wheat fell steadily to 7–9% from 1950 to 2005, and to 6–7% since then. For many years, Russia was the country with more durum wheat cultivation, with around six million ha in the period 1910–1940. Turkey, Italy, Algeria, and India were also big historical players regarding cultivation of this crop. Currently, Canada, Algeria, Italy, and Turkey have the largest durum wheat acreage. The main breeding activities and the future of durum wheat are discussed.