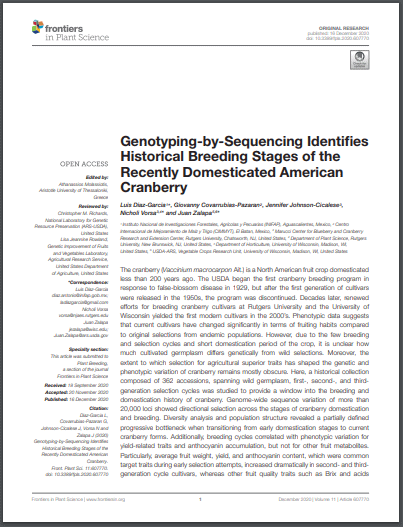 The cranberry (Vaccinium macrocarpon Ait.) is a North American fruit crop domesticated less than 200 years ago. The USDA began the first cranberry breeding program in response to false-blossom disease in 1929, but after the first generation of cultivars were released in the 1950s, the program was discontinued. Decades later, renewed efforts for breeding cranberry cultivars at Rutgers University and the University of Wisconsin yielded the first modern cultivars in the 2000’s. Phenotypic data suggests that current cultivars have changed significantly in terms of fruiting habits compared to original selections from endemic populations. However, due to the few breeding and selection cycles and short domestication period of the crop, it is unclear how much cultivated germplasm differs genetically from wild selections. Moreover, the extent to which selection for agricultural superior traits has shaped the genetic and phenotypic variation of cranberry remains mostly obscure. Here, a historical collection composed of 362 accessions, spanning wild germplasm, first-, second-, and third-generation selection cycles was studied to provide a window into the breeding and domestication history of cranberry. Genome-wide sequence variation of more than 20,000 loci showed directional selection across the stages of cranberry domestication and breeding. Diversity analysis and population structure revealed a partially defined progressive bottleneck when transitioning from early domestication stages to current cranberry forms. Additionally, breeding cycles correlated with phenotypic variation for yield-related traits and anthocyanin accumulation, but not for other fruit metabolites. Particularly, average fruit weight, yield, and anthocyanin content, which were common target traits during early selection attempts, increased dramatically in second- and third-generation cycle cultivars, whereas other fruit quality traits such as Brix and acids showed comparable variation among all breeding stages. Genome-wide association mapping in this diversity panel allowed us to identify marker-trait associations for average fruit weight and fruit rot, which are two traits of great agronomic relevance today and could be further exploited to accelerate cranberry genetic improvement. This study constitutes the first genome-wide analysis of cranberry genetic diversity, which explored how the recurrent use of wild germplasm and first-generation selections into cultivar development have shaped the evolutionary history of this crop species.