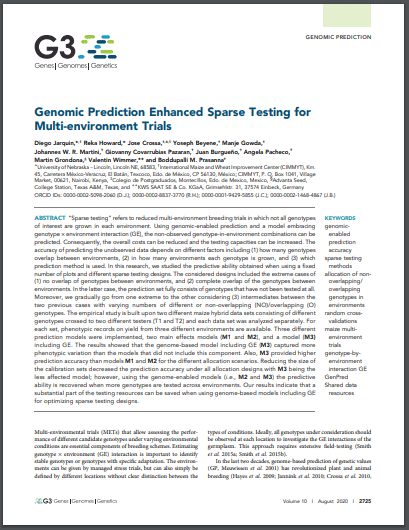 “Sparse testing” refers to reduced multi-environment breeding trials in which not all genotypes of interest are grown in each environment. Using genomic-enabled prediction and a model embracing genotype · environment interaction (GE), the non-observed genotype-in-environment combinations can be predicted. Consequently, the overall costs can be reduced and the testing capacities can be increased. The accuracy of predicting the unobserved data depends on different factors including (1) how many genotypes overlap between environments, (2) in how many environments each genotype is grown, and (3) which prediction method is used. In this research, we studied the predictive ability obtained when using a fixed number of plots and different sparse testing designs. The considered designs included the extreme cases of (1) no overlap of genotypes between environments, and (2) complete overlap of the genotypes between environments. In the latter case, the prediction set fully consists of genotypes that have not been tested at all. Moreover, we gradually go from one extreme to the other considering (3) intermediates between the two previous cases with varying numbers of different or non-overlapping (NO)/overlapping (O) genotypes. The empirical study is built upon two different maize hybrid data sets consisting of different genotypes crossed to two different testers (T1 and T2) and each data set was analyzed separately. For each set, phenotypic records on yield from three different environments are available. Three different prediction models were implemented, two main effects models (M1 and M2), and a model (M3) including GE. The results showed that the genome-based model including GE (M3) captured more phenotypic variation than the models that did not include this component. Also, M3 provided higher prediction accuracy than models M1 and M2 for the different allocation scenarios. Reducing the size of the calibration sets decreased the prediction accuracy under all allocation designs with M3 being the less affected model; however, using the genome-enabled models (i.e., M2 and M3) the predictive ability is recovered when more genotypes are tested across environments. Our results indicate that a substantial part of the testing resources can be saved when using genome-based models including GE for optimizing sparse testing designs.