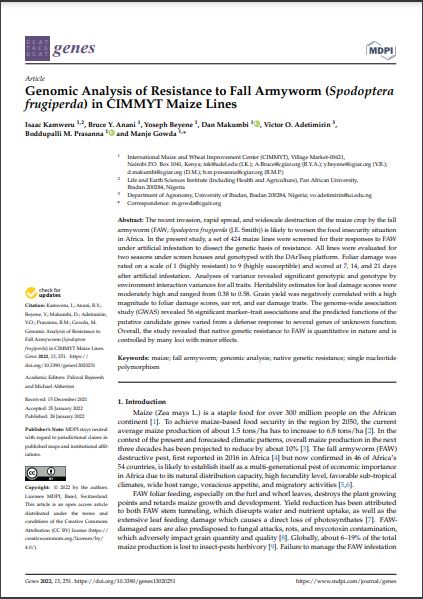 The recent invasion, rapid spread, and widescale destruction of the maize crop by the fall armyworm (FAW; Spodoptera frugiperda (J.E. Smith)) is likely to worsen the food insecurity situation in Africa. In the present study, a set of 424 maize lines were screened for their responses to FAW under artificial infestation to dissect the genetic basis of resistance. All lines were evaluated for two seasons under screen houses and genotyped with the DArTseq platform. Foliar damage was rated on a scale of 1 (highly resistant) to 9 (highly susceptible) and scored at 7, 14, and 21 days after artificial infestation. Analyses of variance revealed significant genotypic and genotype by environment interaction variances for all traits. Heritability estimates for leaf damage scores were moderately high and ranged from 0.38 to 0.58. Grain yield was negatively correlated with a high magnitude to foliar damage scores, ear rot, and ear damage traits. The genome-wide association study (GWAS) revealed 56 significant marker–trait associations and the predicted functions of the putative candidate genes varied from a defense response to several genes of unknown function. Overall, the study revealed that native genetic resistance to FAW is quantitative in nature and is controlled by many loci with minor effects.