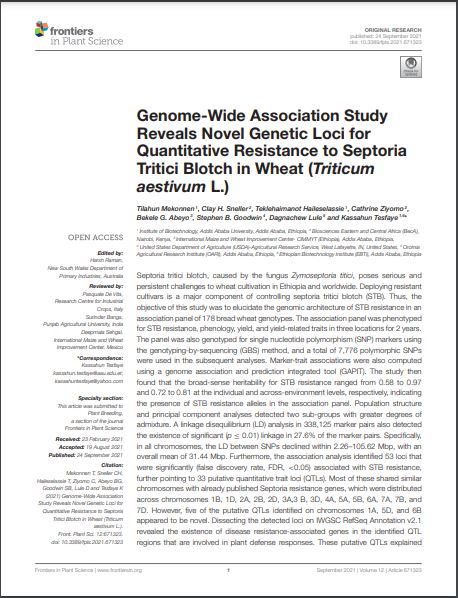 Septoria tritici blotch, caused by the fungus Zymoseptoria titici, poses serious and persistent challenges to wheat cultivation in Ethiopia and worldwide. Deploying resistant cultivars is a major component of controlling septoria tritici blotch (STB). Thus, the objective of this study was to elucidate the genomic architecture of STB resistance in an association panel of 178 bread wheat genotypes. The association panel was phenotyped for STB resistance, phenology, yield, and yield-related traits in three locations for 2 years. The panel was also genotyped for single nucleotide polymorphism (SNP) markers using the genotyping-by-sequencing (GBS) method, and a total of 7,776 polymorphic SNPs were used in the subsequent analyses. Marker-trait associations were also computed using a genome association and prediction integrated tool (GAPIT). The study then found that the broad-sense heritability for STB resistance ranged from 0.58 to 0.97 and 0.72 to 0.81 at the individual and across-environment levels, respectively, indicating the presence of STB resistance alleles in the association panel. Population structure and principal component analyses detected two sub-groups with greater degrees of admixture. A linkage disequilibrium (LD) analysis in 338,125 marker pairs also detected the existence of significant (p ≤ 0.01) linkage in 27.6% of the marker pairs. Specifically, in all chromosomes, the LD between SNPs declined within 2.26–105.62 Mbp, with an overall mean of 31.44 Mbp. Furthermore, the association analysis identified 53 loci that were significantly (false discovery rate, FDR, <0.05) associated with STB resistance, further pointing to 33 putative quantitative trait loci (QTLs). Most of these shared similar chromosomes with already published Septoria resistance genes, which were distributed across chromosomes 1B, 1D, 2A, 2B, 2D, 3A,3 B, 3D, 4A, 5A, 5B, 6A, 7A, 7B, and 7D. However, five of the putative QTLs identified on chromosomes 1A, 5D, and 6B appeared to be novel. Dissecting the detected loci on IWGSC RefSeq Annotation v2.1 revealed the existence of disease resistance-associated genes in the identified QTL regions that are involved in plant defense responses. These putative QTLs explained 2.7–13.2% of the total phenotypic variation. Seven of the QTLs (R2 = 2.7–10.8%) for STB resistance also co-localized with marker-trait associations (MTAs) for agronomic traits. Overall, this analysis reported on putative QTLs for adult plant resistance to STB and some important agronomic traits. The reported and novel QTLs have been identified previously, indicating the potential to improve STB resistance by pyramiding QTLs by marker-assisted selection.