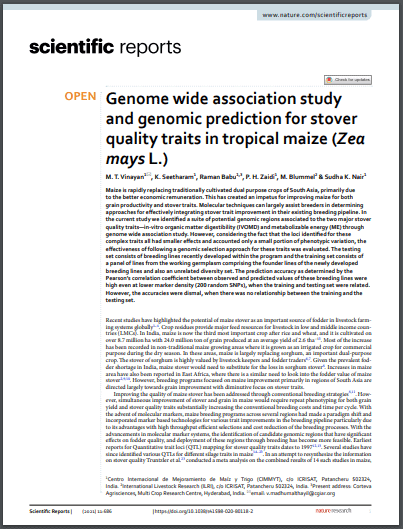 Maize is rapidly replacing traditionally cultivated dual purpose crops of South Asia, primarily due to the better economic remuneration. This has created an impetus for improving maize for both grain productivity and stover traits. Molecular techniques can largely assist breeders in determining approaches for effectively integrating stover trait improvement in their existing breeding pipeline. In the current study we identified a suite of potential genomic regions associated to the two major stover quality traits—in-vitro organic matter digestibility (IVOMD) and metabolizable energy (ME) through genome wide association study. However, considering the fact that the loci identified for these complex traits all had smaller effects and accounted only a small portion of phenotypic variation, the effectiveness of following a genomic selection approach for these traits was evaluated. The testing set consists of breeding lines recently developed within the program and the training set consists of a panel of lines from the working germplasm comprising the founder lines of the newly developed breeding lines and also an unrelated diversity set. The prediction accuracy as determined by the Pearson’s correlation coefficient between observed and predicted values of these breeding lines were high even at lower marker density (200 random SNPs), when the training and testing set were related. However, the accuracies were dismal, when there was no relationship between the training and the testing set.