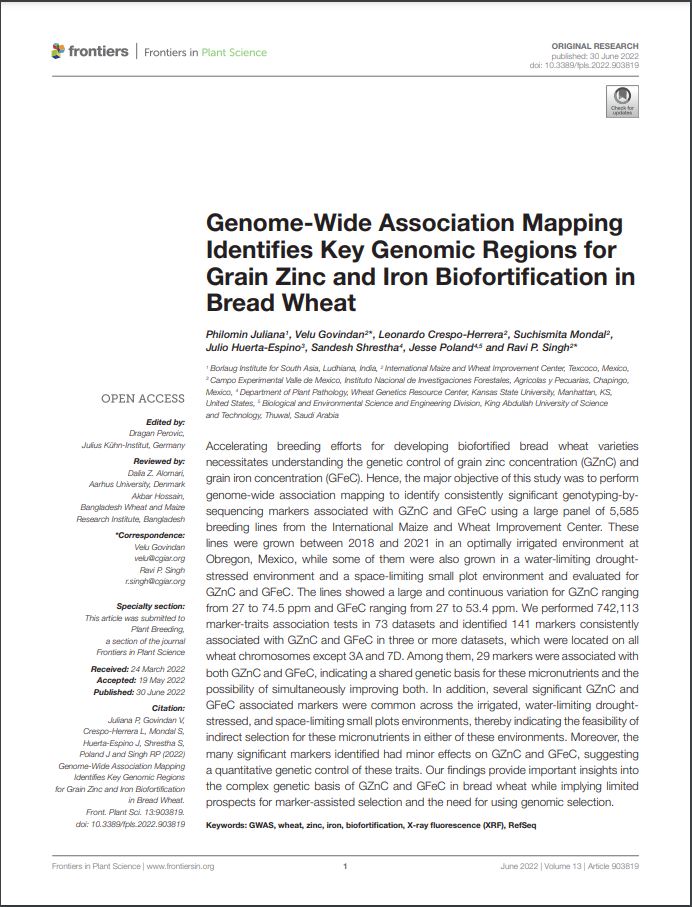 Accelerating breeding efforts for developing biofortified bread wheat varieties necessitates understanding the genetic control of grain zinc concentration (GZnC) and grain iron concentration (GFeC). Hence, the major objective of this study was to perform genome-wide association mapping to identify consistently significant genotyping-by-sequencing markers associated with GZnC and GFeC using a large panel of 5,585 breeding lines from the International Maize and Wheat Improvement Center. These lines were grown between 2018 and 2021 in an optimally irrigated environment at Obregon, Mexico, while some of them were also grown in a water-limiting drought-stressed environment and a space-limiting small plot environment and evaluated for GZnC and GFeC. The lines showed a large and continuous variation for GZnC ranging from 27 to 74.5 ppm and GFeC ranging from 27 to 53.4 ppm. We performed 742,113 marker-traits association tests in 73 datasets and identified 141 markers consistently associated with GZnC and GFeC in three or more datasets, which were located on all wheat chromosomes except 3A and 7D. Among them, 29 markers were associated with both GZnC and GFeC, indicating a shared genetic basis for these micronutrients and the possibility of simultaneously improving both. In addition, several significant GZnC and GFeC associated markers were common across the irrigated, water-limiting drought-stressed, and space-limiting small plots environments, thereby indicating the feasibility of indirect selection for these micronutrients in either of these environments. Moreover, the many significant markers identified had minor effects on GZnC and GFeC, suggesting a quantitative genetic control of these traits. Our findings provide important insights into the complex genetic basis of GZnC and GFeC in bread wheat while implying limited prospects for marker-assisted selection and the need for using genomic selection.