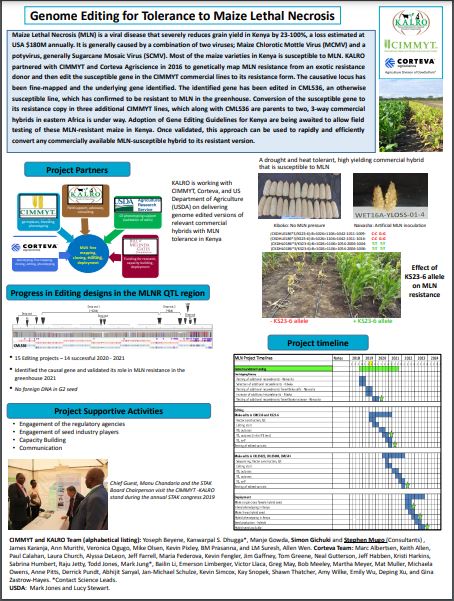 Maize Lethal Necrosis (MLN) is a viral disease that severely reduces grain yield in Kenya by 23-100%, a loss estimated at USA $180M annually. It is generally caused by a combination of two viruses; Maize Chlorotic Mottle Virus (MCMV) and a potyvirus, generally Sugarcane Mosaic Virus (SCMV). Most of the maize varieties in Kenya is susceptible to MLN. KALRO partnered with CIMMYT and Corteva Agriscience in 2016 to genetically map MLN resistance from an exotic resistance donor and then edit the susceptible gene in the CIMMYT commercial lines to its resistance form. The causative locus has been fine-mapped and the underlying gene identified. The identified gene has been edited in CML536, an otherwise susceptible line, which has confirmed to be resistant to MLN in the greenhouse. Conversion of the susceptible gene to its resistance copy in three additional CIMMYT lines, which along with CML536 are parents to two, 3-way commercial hybrids in eastern Africa is under way. Adoption of Gene Editing Guidelines for Kenya are being awaited to allow field testing of these MLN-resistant maize in Kenya. Once validated, this approach can be used to rapidly and efficiently convert any commercially available MLN-susceptible hybrid to its resistant version.