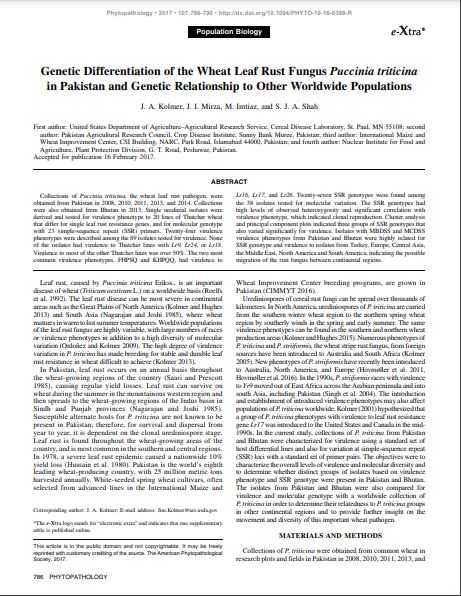 Collections of Puccinia triticina, the wheat leaf rust pathogen, were obtained from Pakistan in 2008, 2010, 2011, 2013, and 2014. Collections were also obtained from Bhutan in 2013. Single uredinial isolates were derived and tested for virulence phenotype to 20 lines of Thatcher wheat that differ for single leaf rust resistance genes, and for molecular genotype with 23 simple-sequence repeat (SSR) primers. Twenty-four virulence phenotypes were described among the 89 isolates tested for virulence. None of the isolates had virulence to Thatcher lines with Lr9, Lr24, or Lr18. Virulence to most of the other Thatcher lines was over 50%. The two most common virulence phenotypes, FHPSQ and KHPQQ, had virulence to Lr16, Lr17, and Lr26. Twenty-seven SSR genotypes were found among the 38 isolates tested for molecular variation. The SSR genotypes had high levels of observed heterozygosity and significant correlation with virulence phenotype, which indicated clonal reproduction. Cluster analysis and principal component plots indicated three groups of SSR genotypes that also varied significantly for virulence. Isolates with MBDSS and MCDSS virulence phenotypes from Pakistan and Bhutan were highly related for SSR genotype and virulence to isolates from Turkey, Europe, Central Asia, the Middle East, North America and South America, indicating the possible migration of the rust fungus between continental regions.