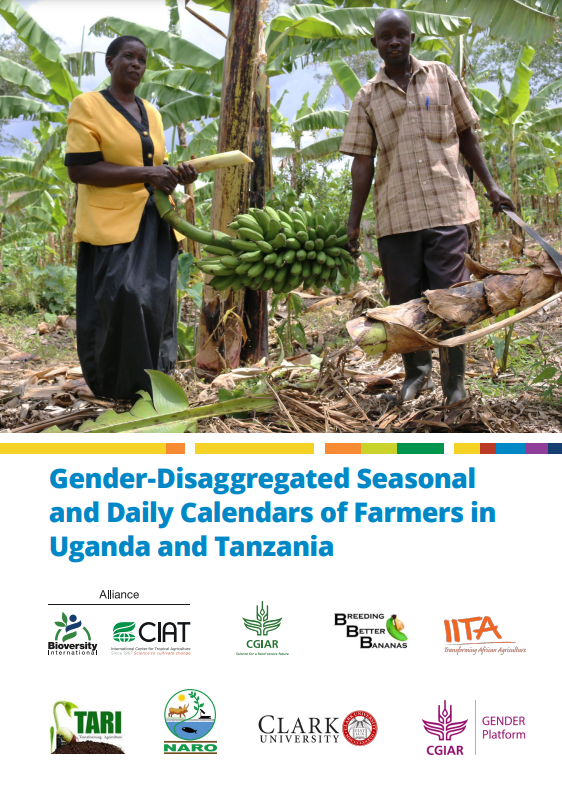 This report discusses the agricultural activities (seasonal, weekly, and daily) that take place in a typical year to provide insight into men’s and women’s perceptions of the seasons, agricultural activities,crops grown, and sex-disaggregated division of labor related to those crops and activities performed during specific times in a day or week in selected regions of Uganda and Tanzania.

Qualitative data were collected from 38 sex-disaggregated focus group discussions (FGDs) conducted with a total of 341 participants.

Sixteen FGDs consisted of men only and 22 consisted of women only. Research was conducted in two
districts in Uganda (Luweero in the Central Region and Mbarara in the Western Region) and four districts in Tanzania – Meru in Arusha Region, Moshi in Kilimanjaro (Northeastern zone), Rungwe in Mbeya Region (Southern Highland zone), and Bukoba in Kagera Region (Northwestern zone).

Agriculture was the main occupation for the participants in both countries. The ten most commonly grown crops across all districts included banana, maize, beans, coffee, sweet potatoes, cassava, groundnuts, and vegetables (including leafy greens), with banana being ranked as the most important crop in both countries. Maize and beans were mostly emphasized by women as important food and cash crops.

The ranking of crop importance provides insight into what participants viewed as important for meeting household subsistence needs as well as providing cash income. The month of March was reported as the start of the farming season by most FGDs, with peak rainfall occurring in April and November. Peak sunshine occurred in July and January/ February. There were also some slight seasonal variations across the different districts in the timing and types of cropping activities. For instance, most sweet potato activity takes place during the rainy season, while for beans and banana, two peaks of activities occur, one in the rainy season and one in the dry season.

Coffee activities increase and decrease when bean and banana activities decrease and increase, respectively, indicating when labor can be transferred between these crops. The division of labor
by men and women showed that cropping activities for banana were mostly done by men as they spent
more labor on banana than on other crops. As such, nbanana was regarded as a men’s crop. These activities, which include land preparation, procuring planting material, and digging holes and trenches, were not specific to a banana usage type (e.g., dessert, cooking, beer). Similar to banana, coffee was considered a cash and men’s crop, as men undertake most (72%) of the cultivation activities. Maize production activities were undertaken by 59% women and 41% men, while women undertook most (81%) of the bean production activities.

The types of activities done over a week in busy and quiet months, for instance, home activities,
child care, and farm work, occurred consistently across the week. Some activities took place on specific days of the week such as worship in mosques or churches.

Sunday was reported as a specific rest day. Home, farming, and livestock activities occur throughout the year regardless of the season. Daily activities such as those done around the home (e.g., food preparation) were consistently undertaken regardless of the season (busy or quiet). Daily activities differed between men and women. While men reported more time spent bresting and socializing than women on both busy and quiet days, women reported more time in food preparation, child care, and home activities (which include cleaning but also making handicrafts or other income-generating activities)