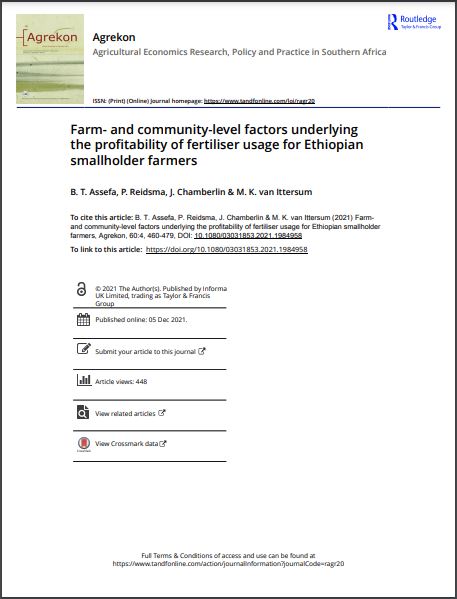 While adoption rates for inorganic fertiliser are relatively high in Ethiopia, application rates are generally considered agronomically suboptimal. Using recent data on Ethiopian smallholder maize producers, we showed that maize response to nitrogen, and the profitability of fertiliser use depended on maize agronomy. The agronomic optimum ranged from 0 to 344 kg/ha with a mean value of 209 kg/ha. The actual nitrogen application rates were only about half the agronomic optimum, on average, and were less than the farm-specific economic optimum on 80% of maize fields. The average economic optimum level was 145 kg N/ha, but when we account for risk aversion, the resulting average optimum level is very close to the average observed usage level of 88 kg N/ha. Addressing risk aversion may help to induce greater levels of fertiliser investments at current prices and yield response rates. Our analysis also suggests that key pathways for increasing the economic returns to smallholder fertiliser investments include: complementing nitrogen inputs with phosphorus inputs and improved varieties, using lower levels of nitrogen under intercropping and manure inputs, enabling farmers to delay output sales beyond the immediate post-harvest period, and lowering the costs of accessing input and output markets.