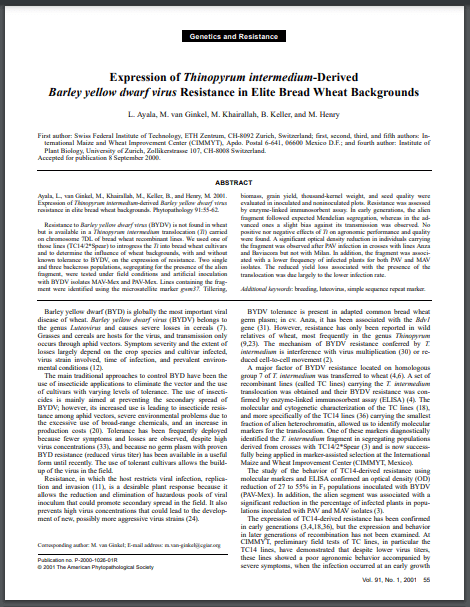 Resistance to Barley yellow dwarf virus (BYDV) is not found in wheat but is available in a Thinopyrum intermedium translocation (Ti) carried on chromosome 7DL of bread wheat recombinant lines. We used one of those lines (TC14/2*Spear) to introgress the Ti into bread wheat cultivars and to determine the influence of wheat backgrounds, with and without known tolerance to BYDV, on the expression of resistance. Two single and three backcross populations, segregating for the presence of the alien fragment, were tested under field conditions and artificial inoculation with BYDV isolates MAV-Mex and PAV-Mex. Lines containing the fragment were identified using the microsatellite marker gwm37. Tillering, biomass, grain yield, thousand-kernel weight, and seed quality were evaluated in inoculated and noninoculated plots. Resistance was assessed by enzyme-linked immunosorbent assay. In early generations, the alien fragment followed expected Mendelian segregation, whereas in the advanced ones a slight bias against its transmission was observed. No positive nor negative effects of Ti on agronomic performance and quality were found. A significant optical density reduction in individuals carrying the fragment was observed after PAV infection in crosses with lines Anza and Baviacora but not with Milan. In addition, the fragment was associated with a lower frequency of infected plants for both PAV and MAV isolates. The reduced yield loss associated with the presence of the translocation was due largely to the lower infection rate.