Effects of temperature and duration of storage on the hatching behaviour of Heterodera latipons (Nematoda: Heteroderidae) 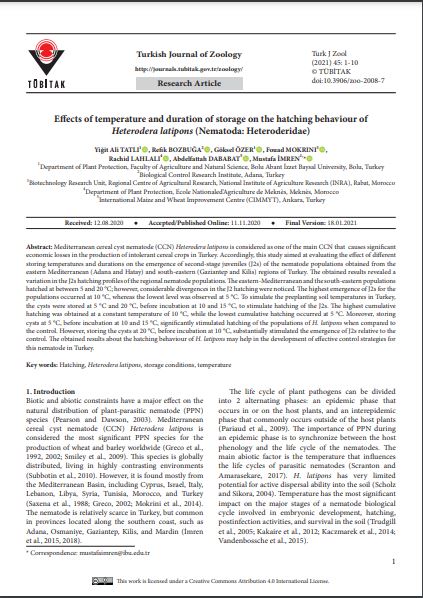 Mediterranean cereal cyst nematode (CCN) Heterodera latipons is considered as one of the main CCN that causes significant economic losses in the production of intolerant cereal crops in Turkey. Accordingly, this study aimed at evaluating the effect of different storing temperatures and durations on the emergence of second-stage juveniles (J2s) of the nematode populations obtained from the eastern Mediterranean (Adana and Hatay) and south-eastern (Gaziantep and Kilis) regions of Turkey. The obtained results revealed a variation in the J2s hatching profiles of the regional nematode populations. The eastern-Mediterranean and the south-eastern populations hatched at between 5 and 20 °C; however, considerable divergences in the J2 hatching were noticed. The highest emergence of J2s for the populations occurred at 10 °C, whereas the lowest level was observed at 5 °C. To simulate the preplanting soil temperatures in Turkey, the cysts were stored at 5 °C and 20 °C, before incubation at 10 and 15 °C, to stimulate hatching of the J2s. The highest cumulative hatching was obtained at a constant temperature of 10 °C, while the lowest cumulative hatching occurred at 5 °C. Moreover, storing cysts at 5 °C, before incubation at 10 and 15 °C, significantly stimulated hatching of the populations of H. latipons when compared to the control. However, storing the cysts at 20 °C, before incubation at 10 °C, substantially stimulated the emergence of J2s relative to the control. The obtained results about the hatching behaviour of H. latipons may help in the development of effective control strategies for this nematode in Turkey.