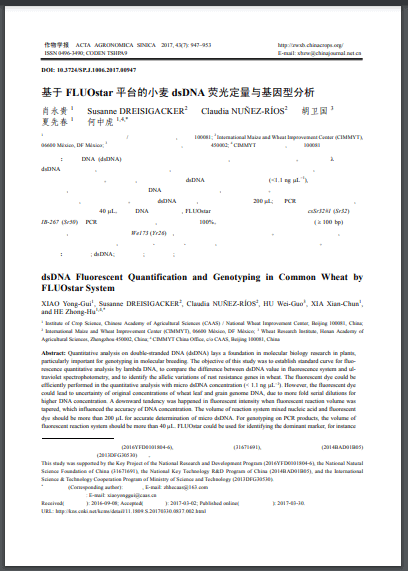 Quantitative analysis on double-stranded DNA (dsDNA) lays a foundation in molecular biology research in plants, particularly important for genotyping in molecular breeding. The objective of this study was to establish standard curve for fluorescence quantitative analysis by lambda DNA, to compare the difference between dsDNA value in fluorescence system and ultraviolet spectrophotometry, and to identify the allelic variations of rust resistance genes in wheat. The fluorescent dye could be efficiently performed in the quantitative analysis with micro dsDNA concentration (< 1.1 ng ?L?1). However, the fluorescent dye could lead to uncertainty of original concentrations of wheat leaf and grain genome DNA, due to more fold serial dilutions for higher DNA concentration. A downward tendency was happened in fluorescent intensity when fluorescent reaction volume was tapered, which influenced the accuracy of DNA concentration. The volume of reaction system mixed nucleic acid and fluorescent dye should be more than 200 ?L for accurate determination of micro dsDNA. For genotyping on PCR products, the volume of fluorescent reaction system should be more than 40 ?L. FLUOstar could be used for identifying the dominant marker, for instance csSr32#1 (Sr32) and IB-267 (Sr50), its accuracy was 100% in correspondence with that from agarose gel electrophoresis. Co-dominant marker with the characteristic of peculiarity and major difference in amplified fragment length ( ≥100 bp), such as We173 (Yr26), could also be identified by fluorescent analysis. Compared with agarose gel electrophoresis method, fluorescent method have a simple, convenient, and rapid oparetion with high repeatability, and can be used for segregating generations in marker-assisted breeding.