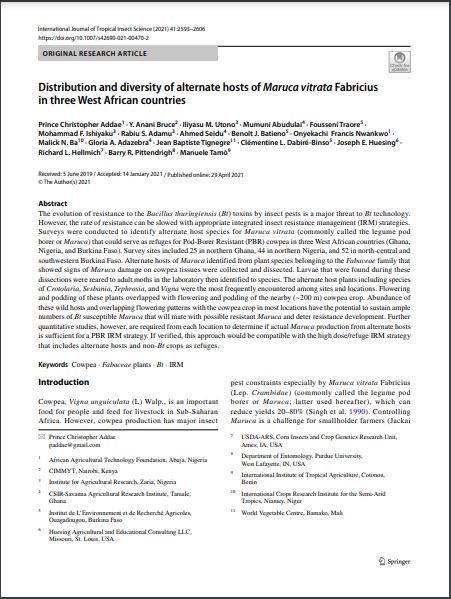 The evolution of resistance to the Bacillus thuringiensis (Bt) toxins by insect pests is a major threat to Bt technology. However, the rate of resistance can be slowed with appropriate integrated insect resistance management (IRM) strategies. Surveys were conducted to identify alternate host species for Maruca vitrata (commonly called the legume pod borer or Maruca) that could serve as refuges for Pod-Borer Resistant (PBR) cowpea in three West African countries (Ghana, Nigeria, and Burkina Faso). Survey sites included 25 in northern Ghana, 44 in northern Nigeria, and 52 in north-central and southwestern Burkina Faso. Alternate hosts of Maruca identified from plant species belonging to the Fabaceae family that showed signs of Maruca damage on cowpea tissues were collected and dissected. Larvae that were found during these dissections were reared to adult moths in the laboratory then identified to species. The alternate host plants including species of Crotolaria, Sesbania, Tephrosia, and Vigna were the most frequently encountered among sites and locations. Flowering and podding of these plants overlapped with flowering and podding of the nearby (~200 m) cowpea crop. Abundance of these wild hosts and overlapping flowering patterns with the cowpea crop in most locations have the potential to sustain ample numbers of Bt susceptible Maruca that will mate with possible resistant Maruca and deter resistance development. Further quantitative studies, however, are required from each location to determine if actual Maruca production from alternate hosts is sufficient for a PBR IRM strategy. If verified, this approach would be compatible with the high dose/refuge IRM strategy that includes alternate hosts and non-Bt crops as refuges.