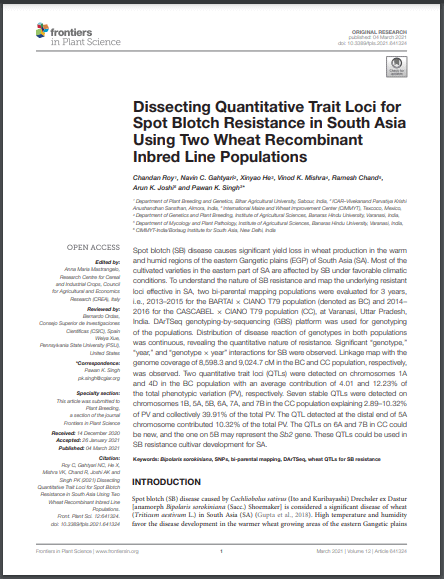 Spot blotch (SB) disease causes significant yield loss in wheat production in the warm and humid regions of the eastern Gangetic plains (EGP) of South Asia (SA). Most of the cultivated varieties in the eastern part of SA are affected by SB under favorable climatic conditions. To understand the nature of SB resistance and map the underlying resistant loci effective in SA, two bi-parental mapping populations were evaluated for 3 years, i.e., 2013–2015 for the BARTAI × CIANO T79 population (denoted as BC) and 2014–2016 for the CASCABEL × CIANO T79 population (CC), at Varanasi, Uttar Pradesh, India. DArTSeq genotyping-by-sequencing (GBS) platform was used for genotyping of the populations. Distribution of disease reaction of genotypes in both populations was continuous, revealing the quantitative nature of resistance. Significant “genotype,” “year,” and “genotype × year” interactions for SB were observed. Linkage map with the genome coverage of 8,598.3 and 9,024.7 cM in the BC and CC population, respectively, was observed. Two quantitative trait loci (QTLs) were detected on chromosomes 1A and 4D in the BC population with an average contribution of 4.01 and 12.23% of the total phenotypic variation (PV), respectively. Seven stable QTLs were detected on chromosomes 1B, 5A, 5B, 6A, 7A, and 7B in the CC population explaining 2.89–10.32% of PV and collectively 39.91% of the total PV. The QTL detected at the distal end of 5A chromosome contributed 10.32% of the total PV. The QTLs on 6A and 7B in CC could be new, and the one on 5B may represent the Sb2 gene. These QTLs could be used in SB resistance cultivar development for SA.