Development and use of genic molecular markers (GMMs) for construction of a transcript map of chickpea (Cicer arietinum L.) 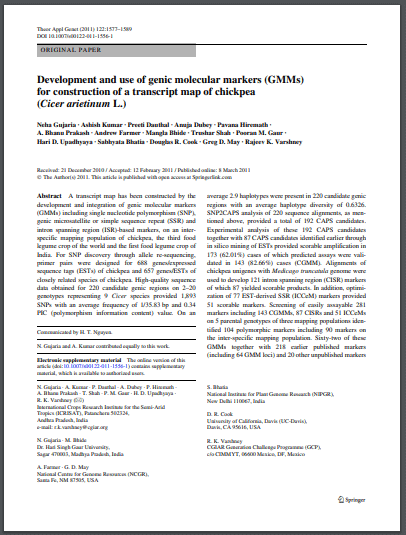 A transcript map has been constructed by the development and integration of genic molecular markers (GMMs) including single nucleotide polymorphism (SNP), genic microsatellite or simple sequence repeat (SSR) and intron spanning region (ISR)-based markers, on an inter-specific mapping population of chickpea, the third food legume crop of the world and the first food legume crop of India. For SNP discovery through allele re-sequencing, primer pairs were designed for 688 genes/expressed sequence tags (ESTs) of chickpea and 657 genes/ESTs of closely related species of chickpea. High-quality sequence data obtained for 220 candidate genic regions on 2-20 genotypes representing 9 Cicer species provided 1,893 SNPs with an average frequency of 1/35.83 bp and 0.34 PIC (polymorphism information content) value. On an average 2.9 haplotypes were present in 220 candidate genic regions with an average haplotype diversity of 0.6326. SNP2CAPS analysis of 220 sequence alignments, as mentioned above, provided a total of 192 CAPS candidates. Experimental analysis of these 192 CAPS candidates together with 87 CAPS candidates identified earlier through in silico mining of ESTs provided scorable amplification in 173 (62.01%) cases of which predicted assays were validated in 143 (82.66%) cases (CGMM). Alignments of chickpea unigenes with Medicago truncatula genome were used to develop 121 intron spanning region (CISR) markers of which 87 yielded scorable products. In addition, optimization of 77 EST-derived SSR (ICCeM) markers provided 51 scorable markers. Screening of easily assayable 281 markers including 143 CGMMs, 87 CISRs and 51 ICCeMs on 5 parental genotypes of three mapping populations identified 104 polymorphic markers including 90 markers on the inter-specific mapping population. Sixty-two of these GMMs together with 218 earlier published markers (including 64 GMM loci) and 20 other unpublished markers could be integrated into this genetic map. A genetic map developed here, therefore, has a total of 300 loci including 126 GMM loci and spans 766.56 cM, with an average inter-marker distance of 2.55 cM. In summary, this is the first report on the development of large-scale genic markers including development of easily assayable markers and a transcript map of chickpea. These resources should be useful not only for genome analysis and genetics and breeding applications of chickpea, but also for comparative legume genomics.