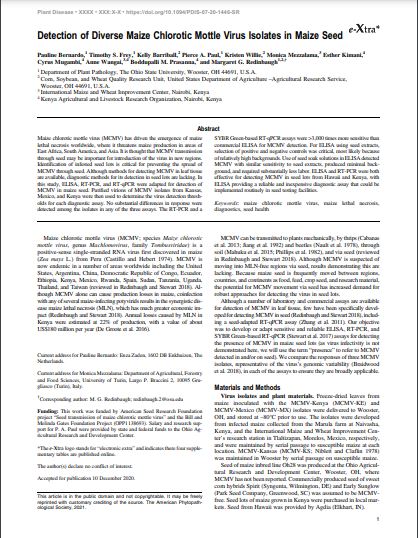 Maize chlorotic mottle virus (MCMV) has driven the emergence of maize lethal necrosis (MLN) worldwide, where it threatens maize production in areas of East Africa, South America, and Asia. It is thought that MCMV transmission through seed may be important for introduction of the virus in new regions. Identification of infested seed lots is critical for preventing the spread of MCMV through seed. Although methods for detecting MCMV in leaf tissue are available, diagnostic methods for its detection in seed lots are lacking. In this study, ELISA, RT-PCR, and RT-qPCR were adapted for detection of MCMV in maize seed. Purified virions of MCMV isolates from Kansas, Mexico and Kenya were then used to determine the virus detection thresholds for each diagnostic assay. No substantial differences in response were detected among the isolates in any of the three assays. The RT-PCR and a SYBRTM green-based RT-qPCR assays were >3,000 times more sensitive than commercial ELISA for MCMV detection. For ELISA using seed extracts, selection of positive and negative controls was critical, most likely because of relatively high backgrounds. Use of seed soak solutions in ELISA detected MCMV with similar sensitivity to seed extracts, produced minimal background, and required substantially less labor. ELISA and RT-PCR were both effective for detecting MCMV in seed lots from Hawaii and Kenya, with ELISA providing a reliable and inexpensive diagnostic assay that could be implemented routinely in seed testing facilities.