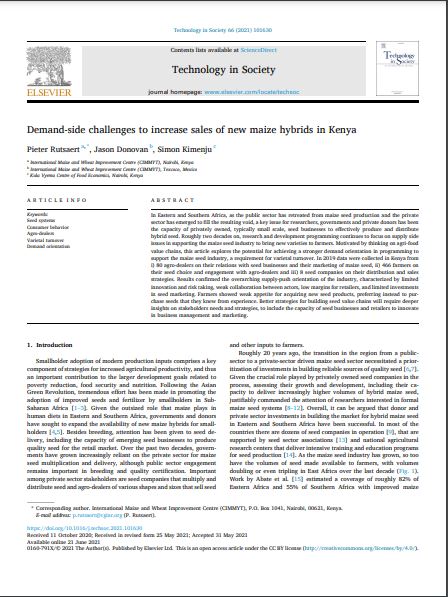 In Eastern and Southern Africa, as the public sector has retreated from maize seed production and the private sector has emerged to fill the resulting void, a key issue for researchers, governments and private donors has been the capacity of privately owned, typically small scale, seed businesses to effectively produce and distribute hybrid seed. Roughly two decades on, research and development programming continues to focus on supply side issues in supporting the maize seed industry to bring new varieties to farmers. Motivated by thinking on agri-food value chains, this article explores the potential for achieving a stronger demand orientation in programming to support the maize seed industry, a requirement for varietal turnover. In 2019 data were collected in Kenya from i) 80 agro-dealers on their relations with seed businesses and their marketing of maize seed, ii) 466 farmers on their seed choice and engagement with agro-dealers and iii) 8 seed companies on their distribution and sales strategies. Results confirmed the overarching supply-push orientation of the industry, characterized by limited innovation and risk taking, weak collaboration between actors, low margins for retailers, and limited investments in seed marketing. Farmers showed weak appetite for acquiring new seed products, preferring instead to purchase seeds that they knew from experience. Better strategies for building seed value chains will require deeper insights on stakeholders needs and strategies, to include the capacity of seed businesses and retailers to innovate in business management and marketing.