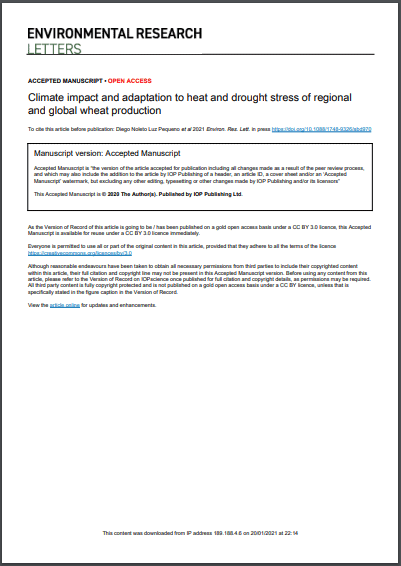 Wheat (Triticum aestivum) is the most widely grown food crop in the world threatened by future climate change. In this study, we simulated climate change impacts and adaptation strategies for wheat globally using new crop genetic traits (CGT), including increased heat tolerance, early vigor to increase early crop water use, late flowering to reverse an earlier anthesis in warmer conditions, and the combined traits with additional nitrogen (N) fertilizer applications, as an option to maximize genetic gains. These simulations were completed using three wheat crop models and five Global Climate Models (GCM) for RCP 8.5 at mid-century. Crop simulations were compared with country, US state, and US county grain yield and production. Wheat yield and production from high-yielding and low-yielding countries were mostly captured by the model ensemble mean. However, US state and county yields and production were often poorly reproduced, with large variability in the models, which is likely due to poor soil and crop management input data at this scale. Climate change is projected to decrease global wheat production by -1.9% by mid-century. However, the most negative impacts are projected to affect developing countries in tropical regions. The model ensemble mean suggests large negative yield impacts for African and Southern Asian countries where food security is already a problem. Yields are predicted to decline by -15% in African countries and -16% in Southern Asian countries by 2050. Introducing CGT as an adaptation to climate change improved wheat yield in many regions, but due to poor nutrient management, many developing countries only benefited from adaptation from CGT when combined with additional N fertilizer. As growing conditions and the impact from climate change on wheat vary across the globe, region-specific adaptation strategies need to be explored to increase the possible benefits of adaptations to climate change in the future.