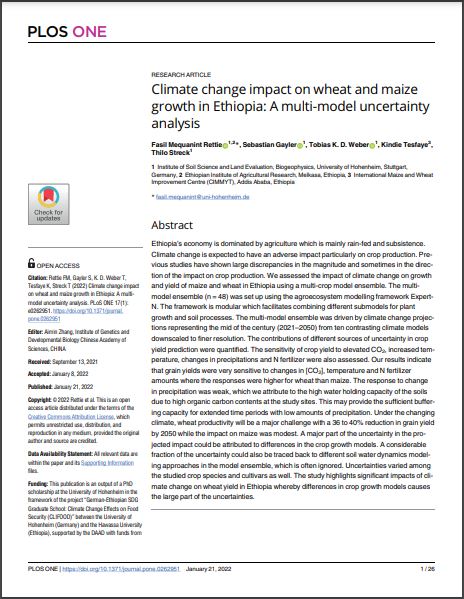 Ethiopia’s economy is dominated by agriculture which is mainly rain-fed and subsistence. Climate change is expected to have an adverse impact particularly on crop production. Previous studies have shown large discrepancies in the magnitude and sometimes in the direction of the impact on crop production. We assessed the impact of climate change on growth and yield of maize and wheat in Ethiopia using a multi-crop model ensemble. The multi-model ensemble (n = 48) was set up using the agroecosystem modelling framework Expert-N. The framework is modular which facilitates combining different submodels for plant growth and soil processes. The multi-model ensemble was driven by climate change projections representing the mid of the century (2021-2050) from ten contrasting climate models downscaled to finer resolution. The contributions of different sources of uncertainty in crop yield prediction were quantified. The sensitivity of crop yield to elevated CO2, increased temperature, changes in precipitations and N fertilizer were also assessed. Our results indicate that grain yields were very sensitive to changes in [CO2], temperature and N fertilizer amounts where the responses were higher for wheat than maize. The response to change in precipitation was weak, which we attribute to the high water holding capacity of the soils due to high organic carbon contents at the study sites. This may provide the sufficient buffering capacity for extended time periods with low amounts of precipitation. Under the changing climate, wheat productivity will be a major challenge with a 36 to 40% reduction in grain yield by 2050 while the impact on maize was modest. A major part of the uncertainty in the projected impact could be attributed to differences in the crop growth models. A considerable fraction of the uncertainty could also be traced back to different soil water dynamics modeling approaches in the model ensemble, which is often ignored. Uncertainties varied among the studied crop species and cultivars as well. The study highlights significant impacts of climate change on wheat yield in Ethiopia whereby differences in crop growth models causes the large part of the uncertainties.