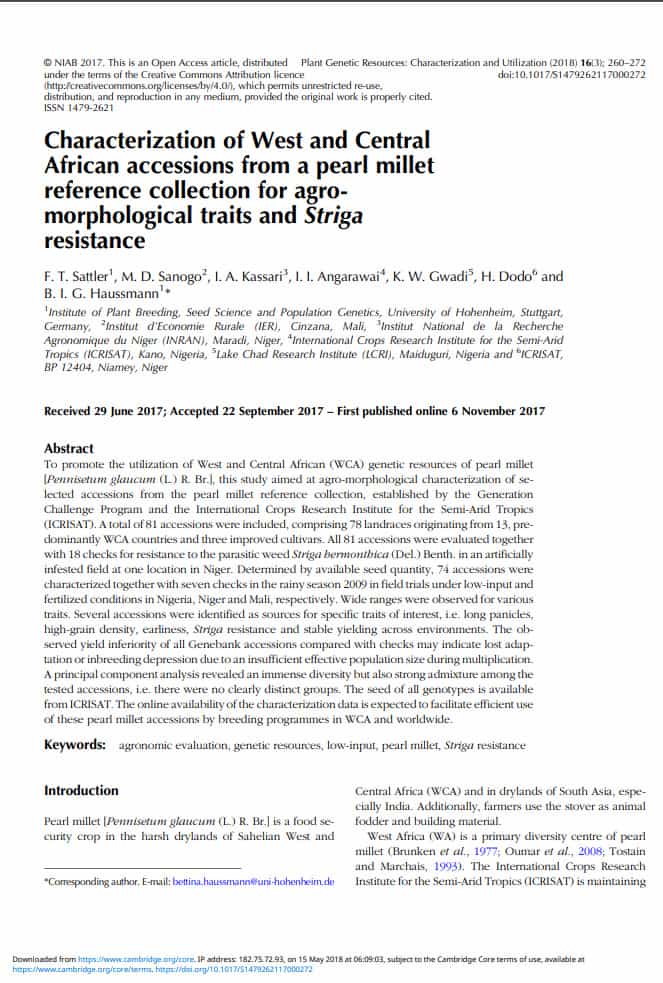 To promote the utilization of West and Central African (WCA) genetic resources of pearl millet [Pennisetum glaucum (L.) R. Br.], this study aimed at agro-morphological characterization of selected accessions from the pearl millet reference collection, established by the Generation Challenge Program and the International Crops Research Institute for the Semi-Arid Tropics (ICRISAT). A total of 81 accessions were included, comprising 78 landraces originating from 13, predominantly WCA countries and three improved cultivars. All 81 accessions were evaluated together with 18 checks for resistance to the parasitic weed Striga hermonthica (Del.) Benth. in an artificially infested field at one location in Niger. Determined by available seed quantity, 74 accessions were characterized together with seven checks in the rainy season 2009 in field trials under low-input and fertilized conditions in Nigeria, Niger and Mali, respectively. Wide ranges were observed for various traits. Several accessions were identified as sources for specific traits of interest, i.e. long panicles, high-grain density, earliness, Striga resistance and stable yielding across environments. The observed yield inferiority of all Genebank accessions compared with checks may indicate lost adaptation or inbreeding depression due to an insufficient effective population size during multiplication. A principal component analysis revealed an immense diversity but also strong admixture among the tested accessions, i.e. there were no clearly distinct groups. The seed of all genotypes is available from ICRISAT. The online availability of the characterization data is expected to facilitate efficient use of these pearl millet accessions by breeding programmes in WCA and worldwide.