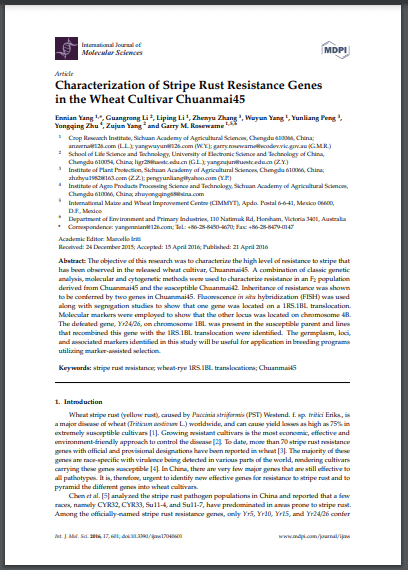 The objective of this research was to characterize the high level of resistance to stripe that has been observed in the released wheat cultivar, Chuanmai45. A combination of classic genetic analysis, molecular and cytogenetic methods were used to characterize resistance in an F2 population derived from Chuanmai45 and the susceptible Chuanmai42. Inheritance of resistance was shown to be conferred by two genes in Chuanmai45. Fluorescence in situ hybridization (FISH) was used along with segregation studies to show that one gene was located on a 1RS.1BL translocation. Molecular markers were employed to show that the other locus was located on chromosome 4B. The defeated gene, Yr24/26, on chromosome 1BL was present in the susceptible parent and lines that recombined this gene with the 1RS.1BL translocation were identified. The germplasm, loci, and associated markers identified in this study will be useful for application in breeding programs utilizing marker-assisted selection.