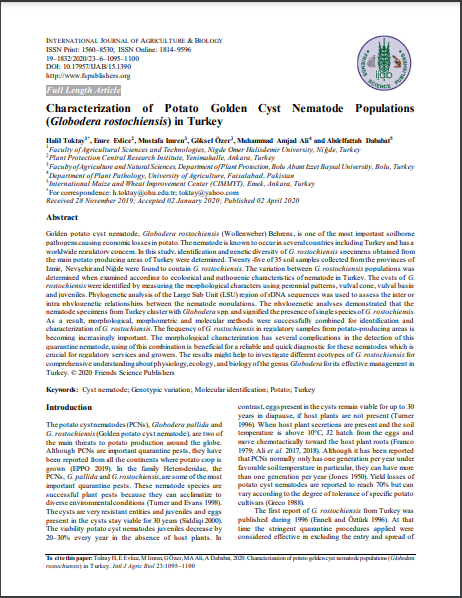 Golden potato cyst nematode, Globodera rostochiensis (Wollenweber) Behrens, is one of the most important soilborne pathogens causing economic losses in potato. The nematode is known to occur in several countries including Turkey and has a worldwide regulatory concern. In this study, identification and genetic diversity of G. rostochiensis specimens obtained from the main potato producing areas of Turkey were determined. Twenty-five of 35 soil samples collected from the provinces of Izmir, Nevsehir and Nigde were found to contain G. rostochiensis. The variation between G. rostochiensis populations was determined when examined according to ecological and pathogenic characteristics of nematode in Turkey. The cysts of G. rostochiensis were identified by measuring the morphological characters using perennial patterns, vulval cone, vulval basin and juveniles. Phylogenetic analysis of the Large Sub Unit (LSU) region of rDNA sequences was used to assess the inter or intra phylogenetic relationships between the nematode populations. The phylogenetic analyses demonstrated that the nematode specimens from Turkey cluster with Globodera spp. and signified the presence of single species of G. rostochiensis. As a result, morphological, morphometric and molecular methods were successfully combined for identification and characterization of G. rostochiensis.The frequency of G. rostochiensis in regulatory samples from potato-producing areas is becoming increasingly important. The morphological characterization has several complications in the detection of this quarantine nematode, using of this combination is beneficial for a reliable and quick diagnostic for these nematodes which is crucial for regulatory services and growers. The results might help to investigate different ecotypes of G. rostochiensis for comprehensive understanding about physiology, ecology, and biology of the genus Globoderafor its effective management in Turkey.