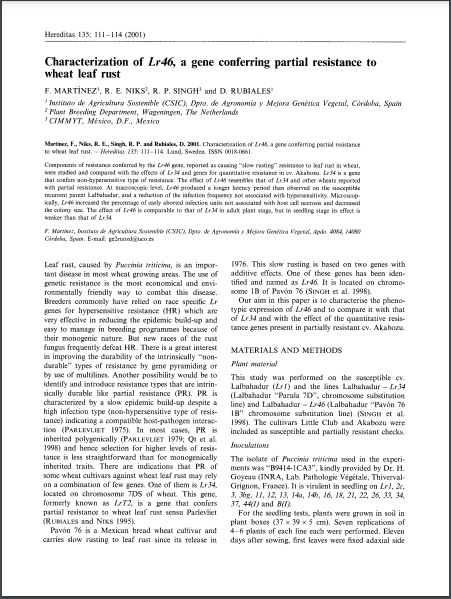 Components of resistance conferred by the Lr46 gene, reported as causing “slow rusting” resistance to leaf rust in wheat, were studied and compared with the effects of Lr34 and genes for quantitative resistance in cv. Akabozu. Lr34 is a gene that confers non-hypersensitive type of resistance. The effect of Lr46 resembles that of Lr34 and other wheats reported with partial resistance. At macroscopic level, Lr46 produced a longer latency period than observed on the susceptible recurrent parent Lalbahadur, and a reduction of the infection frequency not associated with hypersensitivity. Microscopically, Lr46 increased the percentage of early aborted infection units not associated with host cell necrosis and decreased the colony size. The effect of Lr46 is comparable to that of Lr34 in adult plant stage, but in seedling stage its effect is weaker than that of Lr34.