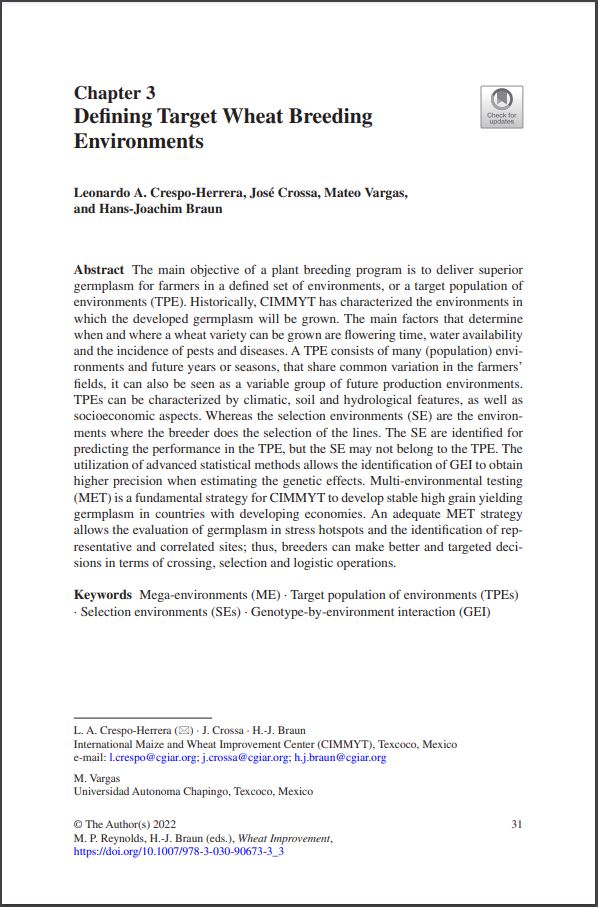 The main objective of a plant breeding program is to deliver superior germplasm for farmers in a defined set of environments, or a target population of environments (TPE). Historically, CIMMYT has characterized the environments in which the developed germplasm will be grown. The main factors that determine when and where a wheat variety can be grown are flowering time, water availability and the incidence of pests and diseases. A TPE consists of many (population) environments and future years or seasons, that share common variation in the farmers’ fields, it can also be seen as a variable group of future production environments. TPEs can be characterized by climatic, soil and hydrological features, as well as socioeconomic aspects. Whereas the selection environments (SE) are the environments where the breeder does the selection of the lines. The SE are identified for predicting the performance in the TPE, but the SE may not belong to the TPE. The utilization of advanced statistical methods allows the identification of GEI to obtain higher precision when estimating the genetic effects. Multi-environmental testing (MET) is a fundamental strategy for CIMMYT to develop stable high grain yielding germplasm in countries with developing economies. An adequate MET strategy allows the evaluation of germplasm in stress hotspots and the identification of representative and correlated sites; thus, breeders can make better and targeted decisions in terms of crossing, selection and logistic operations.