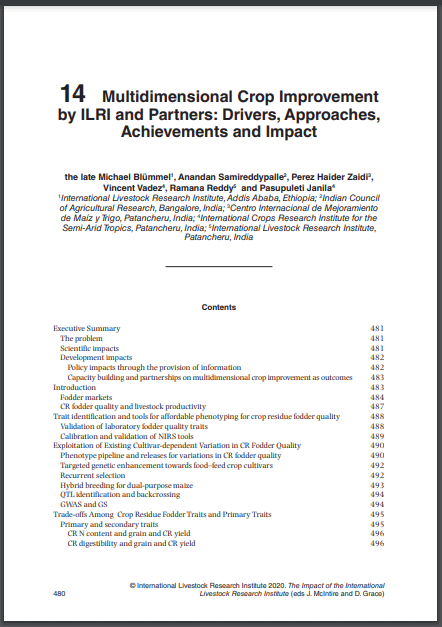 Livestock provides food and income for almost 1.3 billion people across the world. Grazing has long been a principal source of feed in much of South Asia and in sub-Saharan Africa. Due to population pressure, land degradation and conversion from grazing to arable land, grazing areas have contracted, resulting in feed shortages. The conversion of grazing land is likely to be aggravated by climate change (Blümmel et al., 2015b). The increasing demand for animal-sourced food is another factor in putting pressure on feed from all sources (Blümmel et al., 2017).

Feed supply and demand scenarios for South Asia and sub-Saharan Africa have shown that crop residues (CRs) such as straws, stover and haulms commonly provide 50–70% of the feed resources in smallholder systems (Blümmel et al., 2014b; Duncan et al., 2016). In the highlands of Ethiopia, cereal CRs have emerged as the main components of the livestock diet but are generally poor in their nutritive value with a low crude protein content (4%) and digestible organic matter (less than 50%).

Lignocellulosic biomass from forest, agricultural waste and CRs is the most abundant renewable biomass on earth with a total production estimated to range from about 10 billion to 50 billion t (Sanchez and Cardena, 2008). About 3.8 billion t are contributed by CRs, with cereals contributing 74%, sugar crops 10%, legumes 8%, tubers 5% and oil crops 3% (Lal, 2005). Considering the quantities of CRs available and the high nutritive quality of its basic constituents – hexose and pentose sugars – attempts to improve CR biomass for fodder began a century ago (Fingerling and Schmidt, 1919; Beckmann, 1921).These and later attempts to improve CR biomass included chemical, physical and biological treatments. Chemical treatments, particularly the use of hydrolytic agents such as sodium hydroxide and ammonia (Jackson, 1977; Owen and Jayasuriya, 1989), received significant research attention. However, little uptake of chemical treatments was observed, despite efforts by the international research and development communities, and investments into chemical straw treatments have declined since (Owen and Jayasuriya, 1989).

The lack of adoption of postharvest treatments of CRs gave way to a new model of improving the fodder value of CRs by selection and plant
breeding (Reed et al., 1988a) and by identifying anti-nutritive factors in crop biomass (Reed et al., 1988b, 1990). In the mid-1990s, the International
Livestock Research Institute (ILRI) and International Crops Research Institute for the Semi-Arid Tropics (ICRISAT) began a joint programme on improvement of grain and CR traits, focusing on sorghum (Sorghum bicolor) and pearl millet (Pennisetum glaucum (L.) R. Br.) in the semi-arid tropics of India.

Ex ante estimates of potential productivity gains from genetic improvement of the digestibility of multidimensional food and fodder crops would produce high rates of economic return in the form of incremental meat, milk and draught power (e.g. Kristjanson and Zerbini, 1999, for pearl millet and sorghum in semi-arid India). Similar work started in West Africa in the 1990s among the International Institute of Tropical Agriculture (IITA), ICRISAT and ILRI, targeting cowpea. This chapter therefore addresses the following questions. What is the extent of cultivardependent variation in CR fodder quality? Can these variations be exploited without detriment to grain yield? Have quality improvements in CRs from plant selection and breeding been achieved? Have such improvements made a field impact on crop and animal productivity?