Background on the development of the: global strategy for the Ex situ conservation and utilization of maize germplasm 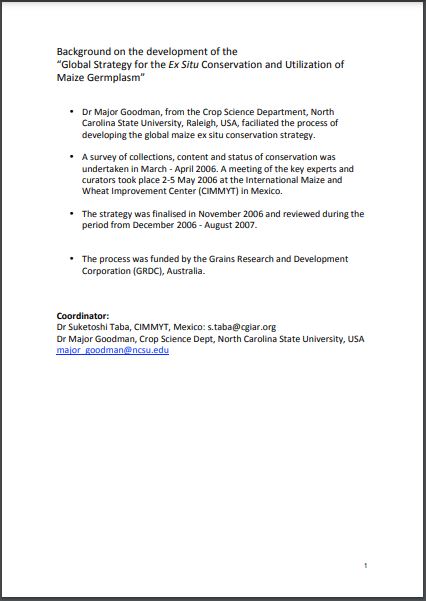 The genetic resources of maize constitute an immeasurable treasure for humankind. Conservation of maize germplasm and knowledge about its variation and uses provide (i) resources for agricultural improvement to reduce hunger and poverty and (ii) a solid knowledge base for future generations of researchers and technological users. The variability among maize landraces exceeds that for any other crop. The collection and study of the accessions of the races of maize are unprecedented in man’s agricultural heritage; their maintenance and regeneration has been remarkable, and their widespread and open availability to research workers has been unique (Taba, 2005). Nonetheless, problems remain: 1. Integration of maize germplasm resources and maize breeding is challenging; historically, efforts have been inconsistent. 2. Most racial studies of maize have been New-World-oriented. 3. Regeneration of some eco-specific accessions has been difficult. 4. Distribution of individual seed requests via national germplasm banks as generally been ineffective due to resource and/or policy issues. 5. Phytosanitary restrictions are a major bottleneck in distributing germplasm samples. 6. Teosinte populations are endangered and have scattered (and less than complete) representation in the major international germplasm banks. 7. Documentation of the materials held in national collections is inconsistent, and sometimes poor, and is held in multiple databases that are not necessarily well maintained or easily accessible. 8. Tripsacum populations are part of the secondary gene pool of maize genetic resources, and some are endangered; some populations should be monitored and conserved. 9. Developing a worldwide strategy for preservation, documentation, distribution, and utilization of maize genetic resources will require attention to these and other, generally less difficult, problems.