Are farmers willing to pay for participatory climate information services? Insights from a case study in peri-urban Khulna, Bangladesh 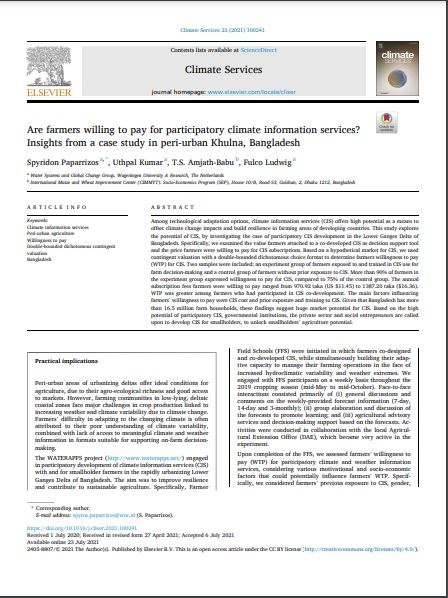 Among technological adaptation options, climate information services (CIS) offers high potential as a means to offset climate change impacts and build resilience in farming areas of developing countries. This study explores the potential of CIS, by investigating the case of participatory CIS development in the Lower Ganges Delta of Bangladesh. Specifically, we examined the value farmers attached to a co-developed CIS as decision support tool and the price farmers were willing to pay for CIS subscriptions. Based on a hypothetical market for CIS, we used contingent valuation with a double-bounded dichotomous choice format to determine farmers willingness to pay (WTP) for CIS. Two samples were included: an experiment group of farmers exposed to and trained in CIS use for farm decision-making and a control group of farmers without prior exposure to CIS. More than 90% of farmers in the experiment group expressed willingness to pay for CIS, compared to 75% of the control group. The annual subscription fees farmers were willing to pay ranged from 970.92 taka (US $11.45) to 1387.20 taka ($16.36). WTP was greater among farmers who had participated in CIS co-development. The main factors influencing farmers’ willingness to pay were CIS cost and prior exposure and training to CIS. Given that Bangladesh has more than 16.5 million farm households, these findings suggest huge market potential for CIS. Based on the high potential of participatory CIS, governmental institutions, the private sector and social entrepreneurs are called upon to develop CIS for smallholders, to unlock smallholders’ agriculture potential.