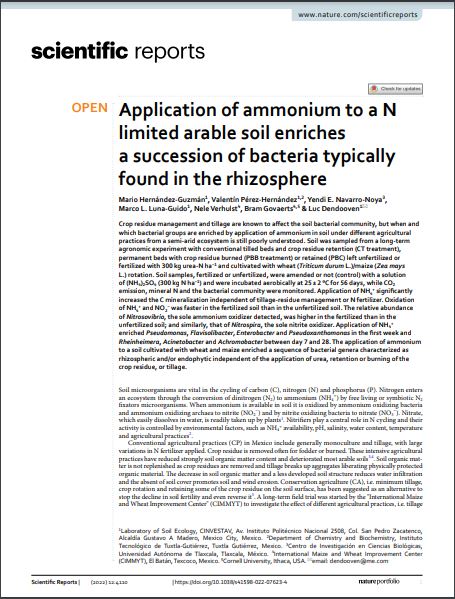 Crop residue management and tillage are known to affect the soil bacterial community, but when and which bacterial groups are enriched by application of ammonium in soil under different agricultural practices from a semi-arid ecosystem is still poorly understood. Soil was sampled from a long-term agronomic experiment with conventional tilled beds and crop residue retention (CT treatment), permanent beds with crop residue burned (PBB treatment) or retained (PBC) left unfertilized or fertilized with 300 kg urea-N ha-1 and cultivated with wheat (Triticum durum L.)/maize (Zea mays L.) rotation. Soil samples, fertilized or unfertilized, were amended or not (control) with a solution of (NH4)2SO4 (300 kg N ha-1) and were incubated aerobically at 25 ± 2 °C for 56 days, while CO2 emission, mineral N and the bacterial community were monitored. Application of NH4+ significantly increased the C mineralization independent of tillage-residue management or N fertilizer. Oxidation of NH4+ and NO2- was faster in the fertilized soil than in the unfertilized soil. The relative abundance of Nitrosovibrio, the sole ammonium oxidizer detected, was higher in the fertilized than in the unfertilized soil; and similarly, that of Nitrospira, the sole nitrite oxidizer. Application of NH4+ enriched Pseudomonas, Flavisolibacter, Enterobacter and Pseudoxanthomonas in the first week and Rheinheimera, Acinetobacter and Achromobacter between day 7 and 28. The application of ammonium to a soil cultivated with wheat and maize enriched a sequence of bacterial genera characterized as rhizospheric and/or endophytic independent of the application of urea, retention or burning of the crop residue, or tillage.