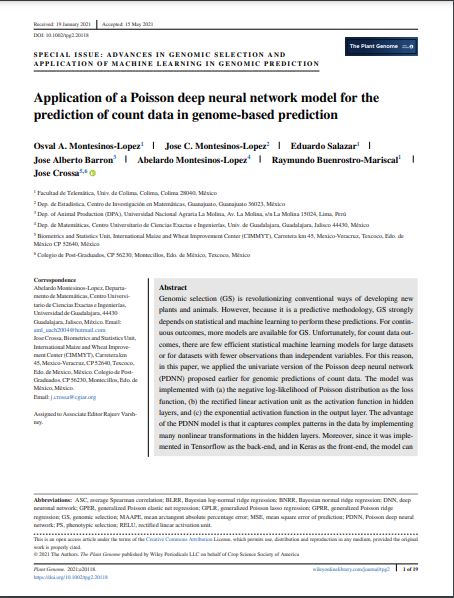 Genomic selection (GS) is revolutionizing conventional ways of developing new plants and animals. However, because it is a predictive methodology, GS strongly depends on statistical and machine learning to perform these predictions. For continuous outcomes, more models are available for GS. Unfortunately, for count data outcomes, there are few efficient statistical machine learning models for large datasets or for datasets with fewer observations than independent variables. For this reason, in this paper, we applied the univariate version of the Poisson deep neural network (PDNN) proposed earlier for genomic predictions of count data. The model was implemented with (a) the negative log-likelihood of Poisson distribution as the loss function, (b) the rectified linear activation unit as the activation function in hidden layers, and (c) the exponential activation function in the output layer. The advantage of the PDNN model is that it captures complex patterns in the data by implementing many nonlinear transformations in the hidden layers. Moreover, since it was implemented in Tensorflow as the back-end, and in Keras as the front-end, the model can be applied to moderate and large datasets, which is a significant advantage over previous GS models for count data. The PDNN model was compared with deep learning models with continuous outcomes, conventional generalized Poisson regression models, and conventional Bayesian regression methods. We found that the PDNN model outperformed the Bayesian regression and generalized Poisson regression methods in terms of prediction accuracy, although it was not better than the conventional deep neural network with continuous outcomes.