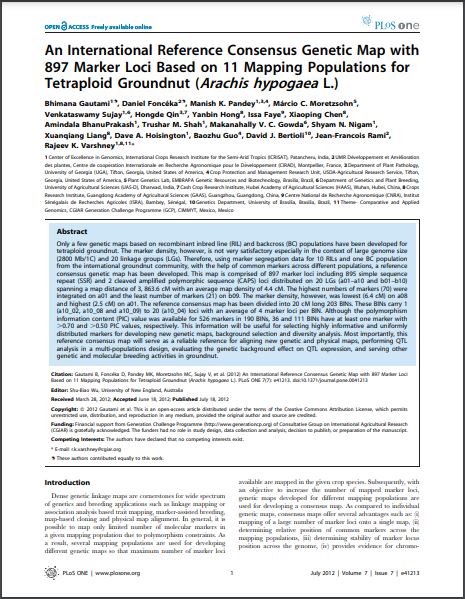 Only a few genetic maps based on recombinant inbred line (RIL) and backcross (BC) populations have been developed for tetraploid groundnut. The marker density, however, is not very satisfactory especially in the context of large genome size (2800 Mb/1C) and 20 linkage groups (LGs). Therefore, using marker segregation data for 10 RILs and one BC population from the international groundnut community, with the help of common markers across different populations, a reference consensus genetic map has been developed. This map is comprised of 897 marker loci including 895 simple sequence repeat (SSR) and 2 cleaved amplified polymorphic sequence (CAPS) loci distributed on 20 LGs (a01-a10 and b01-b10) spanning a map distance of 3, 863.6 cM with an average map density of 4.4 cM. The highest numbers of markers (70) were integrated on a01 and the least number of markers (21) on b09. The marker density, however, was lowest (6.4 cM) on a08 and highest (2.5 cM) on a01. The reference consensus map has been divided into 20 cM long 203 BINs. These BINs carry 1 (a10_02, a10_08 and a10_09) to 20 (a10_04) loci with an average of 4 marker loci per BIN. Although the polymorphism information content (PIC) value was available for 526 markers in 190 BINs, 36 and 111 BINs have at least one marker with &0.70 and &0.50 PIC values, respectively. This information will be useful for selecting highly informative and uniformly distributed markers for developing new genetic maps, background selection and diversity analysis. Most importantly, this reference consensus map will serve as a reliable reference for aligning new genetic and physical maps, performing QTL analysis in a multi-populations design, evaluating the genetic background effect on QTL expression, and serving other genetic and molecular breeding activities in groundnut.