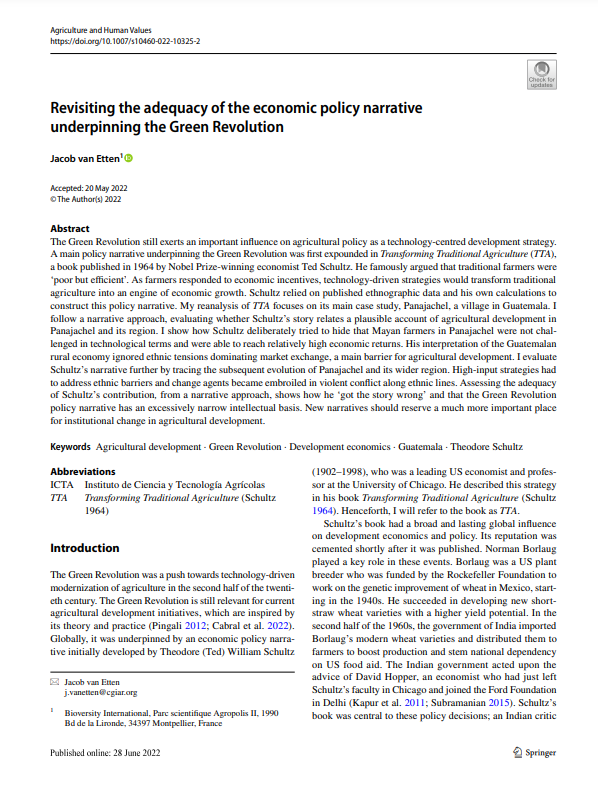 The Green Revolution still exerts an important influence on agricultural policy as a technology-centred development strategy. A main policy narrative underpinning the Green Revolution was first expounded in Transforming Traditional Agriculture (TTA), a book published in 1964 by Nobel Prize-winning economist Ted Schultz. He famously argued that traditional farmers were ‘poor but efficient’. As farmers responded to economic incentives, technology-driven strategies would transform traditional agriculture into an engine of economic growth. Schultz relied on published ethnographic data and his own calculations to construct this policy narrative. My reanalysis of TTA focuses on its main case study, Panajachel, a village in Guatemala. I follow a narrative approach, evaluating whether Schultz’s story relates a plausible account of agricultural development in Panajachel and its region. I show how Schultz deliberately tried to hide that Mayan farmers in Panajachel were not challenged in technological terms and were able to reach relatively high economic returns. His interpretation of the Guatemalan rural economy ignored ethnic tensions dominating market exchange, a main barrier for agricultural development. I evaluate Schultz’s narrative further by tracing the subsequent evolution of Panajachel and its wider region. High-input strategies had to address ethnic barriers and change agents became embroiled in violent conflict along ethnic lines.

Assessing the adequacy of Schultz’s contribution, from a narrative approach, shows how he ‘got the story wrong’ and that the Green Revolution policy narrative has an excessively narrow intellectual basis. New narratives should reserve a much more important place for institutional change in agricultural development.