Adapting yet not adopting? Conservation agriculture in Central Malawi 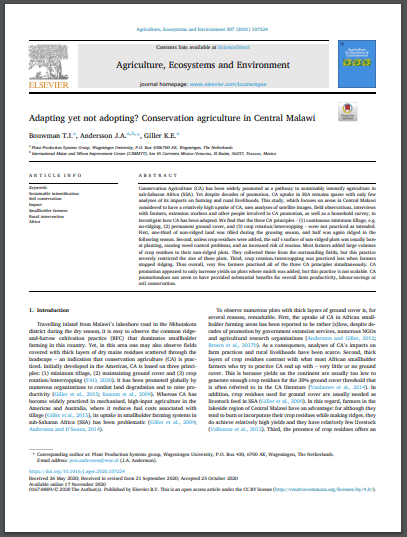 Conservation Agriculture (CA) has been widely promoted as a pathway to sustainably intensify agriculture in sub-Saharan Africa (SSA). Yet despite decades of promotion, CA uptake in SSA remains sparse with only few analyses of its impacts on farming and rural livelihoods. This study, which focuses on areas in Central Malawi considered to have a relatively high uptake of CA, uses analyses of satellite images, field observations, interviews with farmers, extension workers and other people involved in CA promotion, as well as a household survey, to investigate how CA has been adapted. We find that the three CA principles – (1) continuous minimum tillage, e.g. no-ridging, (2) permanent ground cover, and (3) crop rotation/intercropping – were not practiced as intended. First, one-third of non-ridged land was tilled during the growing season, and half was again ridged in the following season. Second, unless crop residues were added, the soil’s surface of non-ridged plots was usually bare at planting, causing weed control problems, and an increased risk of erosion. Most farmers added large volumes of crop residues to their non-ridged plots. They collected these from the surrounding fields, but this practice severely restricted the size of these plots. Third, crop rotation/intercropping was practiced less when farmers stopped ridging. Thus overall, very few farmers practised all of the three CA principles simultaneously. CA promotion appeared to only increase yields on plots where mulch was added, but this practice is not scalable. CA promotiondoes not seem to have provided substantial benefits for overall farm productivity, labour-savings or soil conservation.