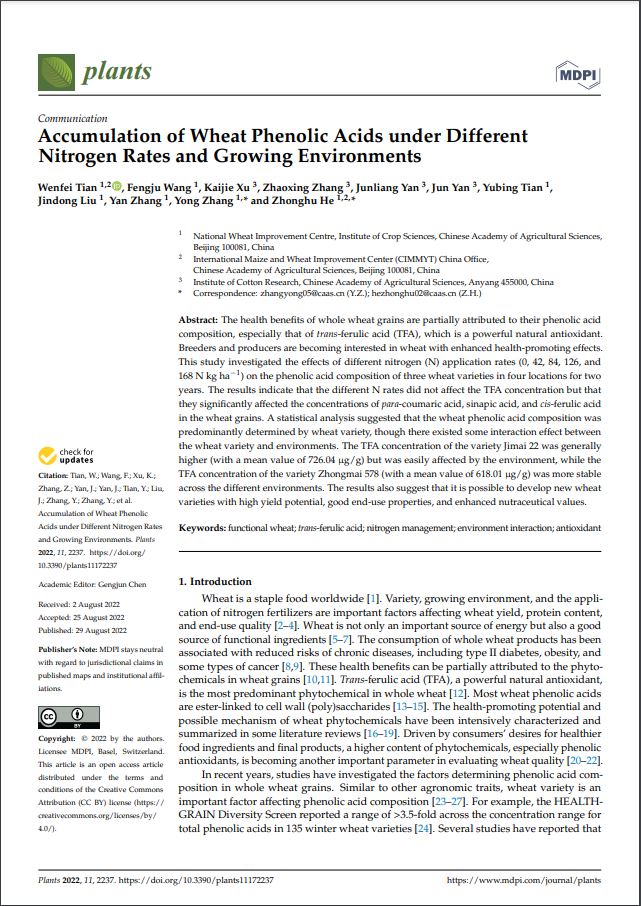 The health benefits of whole wheat grains are partially attributed to their phenolic acid composition, especially that of trans-ferulic acid (TFA), which is a powerful natural antioxidant. Breeders and producers are becoming interested in wheat with enhanced health-promoting effects. This study investigated the effects of different nitrogen (N) application rates (0, 42, 84, 126, and 168 N kg ha−1) on the phenolic acid composition of three wheat varieties in four locations for two years. The results indicate that the different N rates did not affect the TFA concentration but that they significantly affected the concentrations of para-coumaric acid, sinapic acid, and cis-ferulic acid in the wheat grains. A statistical analysis suggested that the wheat phenolic acid composition was predominantly determined by wheat variety, though there existed some interaction effect between the wheat variety and environments. The TFA concentration of the variety Jimai 22 was generally higher (with a mean value of 726.04 µg/g) but was easily affected by the environment, while the TFA concentration of the variety Zhongmai 578 (with a mean value of 618.01 µg/g) was more stable across the different environments. The results also suggest that it is possible to develop new wheat varieties with high yield potential, good end-use properties, and enhanced nutraceutical values