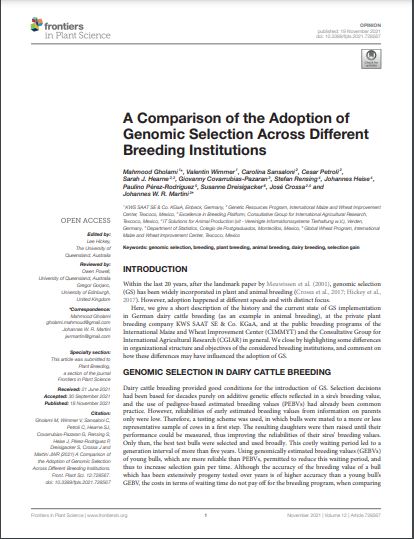 Within the last 20 years, after the landmark paper by Meuwissen et al. (2001), genomic selection (GS) has been widely incorporated in plant and animal breeding (Crossa et al., 2017; Hickey et al., 2017). However, adoption happened at different speeds and with distinct focus. Here, we give a short description of the history and the current state of GS implementation in German dairy cattle breeding (as an example in animal breeding), at the private plant breeding company KWS SAAT SE & Co. KGaA, and at the public breeding programs of the International Maize and Wheat Improvement Center (CIMMYT) and the Consultative Group for International Agricultural Research (CGIAR) in general. We close by highlighting some differences in organizational structure and objectives of the considered breeding institutions, and comment on how these differences may have influenced the adoption of GS.