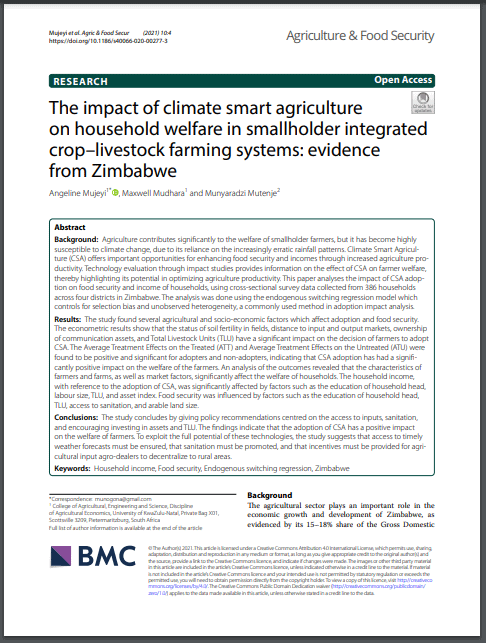 Background: Agriculture contributes significantly to the welfare of smallholder farmers, but it has become highly susceptible to climate change, due to its reliance on the increasingly erratic rainfall patterns. Climate Smart Agriculture (CSA) offers important opportunities for enhancing food security and incomes through increased agriculture productivity. Technology evaluation through impact studies provides information on the effect of CSA on farmer welfare, thereby highlighting its potential in optimizing agriculture productivity. This paper analyses the impact of CSA adoption on food security and income of households, using cross-sectional survey data collected from 386 households across four districts in Zimbabwe. The analysis was done using the endogenous switching regression model which controls for selection bias and unobserved heterogeneity, a commonly used method in adoption impact analysis. Results: The study found several agricultural and socio-economic factors which affect adoption and food security. The econometric results show that the status of soil fertility in fields, distance to input and output markets, ownership of communication assets, and Total Livestock Units (TLU) have a significant impact on the decision of farmers to adopt CSA. The Average Treatment Effects on the Treated (ATT) and Average Treatment Effects on the Untreated (ATU) were found to be positive and significant for adopters and non-adopters, indicating that CSA adoption has had a significantly positive impact on the welfare of the farmers. An analysis of the outcomes revealed that the characteristics of farmers and farms, as well as market factors, significantly affect the welfare of households. The household income, with reference to the adoption of CSA, was significantly affected by factors such as the education of household head, labour size, TLU, and asset index. Food security was influenced by factors such as the education of household head, TLU, access to sanitation, and arable land size. Conclusions: The study concludes by giving policy recommendations centred on the access to inputs, sanitation, and encouraging investing in assets and TLU. The findings indicate that the adoption of CSA has a positive impact on the welfare of farmers. To exploit the full potential of these technologies, the study suggests that access to timely weather forecasts must be ensured, that sanitation must be promoted, and that incentives must be provided for agricultural input agro-dealers to decentralize to rural areas.