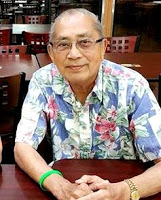 Dr. Virgilio R. “Pexy” Carangal, 84, former agronomist (1974-94) at the International Rice Research Institute (IRRI), passed away due to congestive heart failure on 26 November.
He had been a Filipino plant breeder with an impressive track record in the administration of Philippine public-sector agricultural research when he joined IRRI’s Multiple Cropping Program in 1974. He was tasked with launching and then coordinating the Asian Cropping Systems Network (ACSN).
The concept of networking was new in 1974. The ACSN, under Dr. Carangal’s leadership, broke new ground institutionally since it was the first organization of its kind in international agricultural research. The ACSN, later to become the Asian Rice Farming Systems Network (ARFSN), put a farming systems approach to research into practice. The network’s evolution was a microcosm of the development of conceptual thinking about agricultural research worldwide. This networking model that Dr. Carangal pioneered was widely imitated by other research organizations.

During his more than 20 years at IRRI, he was a dedicated agronomist who was well loved and respected by research collaborators in more than 30 countries in South and Southeast Asia. He raised substantial funds for cropping systems research under the ACSN/ARFSN umbrella and traveled extensively to monitor collaborative projects. He advocated the integration of crop-livestock farming systems and technology development for different ecosystems.
He authored/co-authored numerous scientific papers on cropping and farming systems during the 1976-96 period. His 1996 book, with Simon Chater, On Farmers’ Fields: Portrait of  a Network, encapsulates his seminal networking projects at IRRI. As pointed out in the book, “with emphasis on training and on fostering collaboration between different countries, the ACSN/ARFSN played a key part in building a stronger regional research capacity—one that was equipped to meet the challenges of feeding a hungry world in the 21st century.”
Dr. Carangal was preceded in death by his wife, Connie. He is survived by daughters Aileen Carney and Aimee Dhakhwa and son Eugene Carangal. His wake will be held at the Zimmerman & Sandeman Memorial Chapel in Oak Lawn, Illinois on Sunday, 10 December. A funeral mass will be held on 11 December at St. Terrence Parish, in Alsip, Illinois.
Colleagues and friends may send their messages of condolence to: pexycarangal@gmail.com.